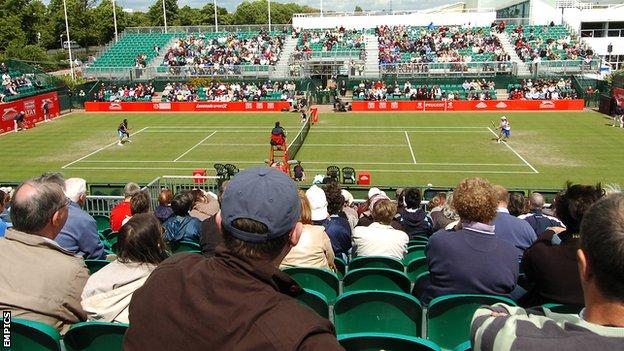 Nottingham will host an ATP World Tour event before Wimbledon in 2015, the Lawn Tennis Association has announced.

An extra week will be added to the grass-court season next year, creating a three-week gap between the end of the French Open and the start of Wimbledon.

It was announced in December that the East Midlands venue will also stage a WTA tournament in 2015.

That will be played on 8-14 June, with the men's event starting on 22 June and contested in the week before Wimbledon.

The Nottingham Open, a men's tournament held at the city's tennis centre, folded in 2008 after 14 years as a warm-up event for the sport's only Grand Slam to be played on grass.

"Nottingham is a great city with a rich sporting pedigree," said Michael Downey, chief executive of the LTA.

"I'm delighted that we are bringing this international tournament back to the area, which will help to inspire more people to play and follow tennis.

"The weeks in the lead-up to Wimbledon are a vital time for players to find their feet on grass, and the Nottingham Tennis Centre boasts some of the finest grass courts in the country."