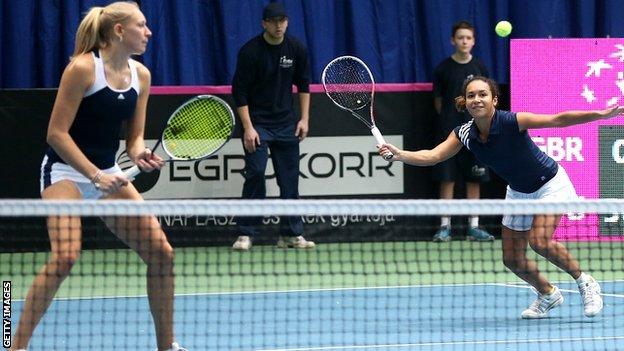 Great Britain's hopes of promotion from the Fed Cup Europe/Africa Zone ended with a 2-1 loss to Romania in Budapest.

Heather Watson won the opening singles but Johanna Konta was then beaten, and Watson and Jocelyn Rae lost the decisive doubles rubber.

Romania, led by world number 10 Simona Halep, are assured of winning Pool B and competing for a World Group II play-off on Sunday.

Britain, captained by Judy Murray, play Hungary in their final tie on Saturday.

Whatever the result, they know that first place in the group is now beyond them, although there is some comfort in the fact that they cannot finish last and so face a relegation play-off.

Britain had beaten Latvia in their opening tie on Wednesday, but Romania always looked like the team to beat, especially as number one Laura Robson is absent from the British team because of a wrist injury.

Halep, world number 26 Sorana Cirstea and top-100 doubles players Monica Niculescu and Irina-Camelia Begu made a formidable squad in the third tier of the Fed Cup.

It came down to the doubles and Niculescu and Begu sealed the tie with plenty to spare in a 6-0 6-2 victory.

"They have a very strong team," Murray told the Fed Cup website. "They have four very strong players in their squad and that was going to be the toughest tie.

"It was a big challenge for us, especially as we didn't have Laura, but Heather had a fantastic match with Sorana Cirstea and I think what that proves is Heather's almost back to her best."

Britain had come through the 16-team stage for the last two years, only to lose to Sweden and Argentina in the play-offs and so slip back into the zonal group tie, where they will return once again in 2015.

"The key to it is building a strong squad, you can see that with the Romanians," added Murray.

"Not only do they have four excellent players here but they have another three waiting in the wings who are very promising, and that's the position we would like to be in."