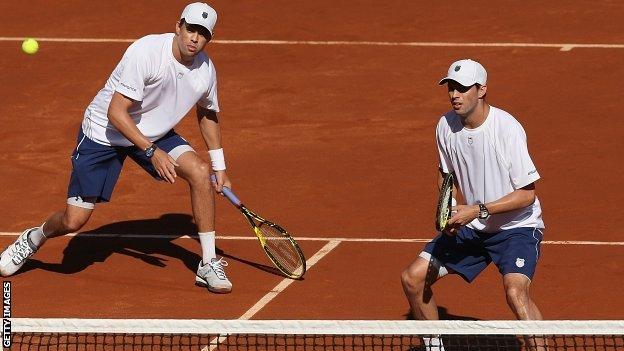 Great Britain will have to get the point they require in Sunday's singles after the USA kept their Davis Cup World Group hopes alive in the doubles.

Wimbledon champion Andy Murray was rested from the doubles ahead of taking on Sam Querrey on Sunday.

Britain have not beaten the USA in the Davis Cup since 1935.

The prospects of ending that barren run remain good, with Murray a strong favourite against world number 45 Querrey, who suffered a shattering five-set defeat by James Ward on Friday.

Should Querrey cause a major upset, team-mate Donald Young will go up against Ward in a decisive fifth rubber.

"A team that has won 15 Grand Slam titles was always likely to be more than a match for the scratch British pairing. Inglot started very nervously on his debut, but after a strong recovery the Brits could have tested the Bryans' reserve still further if their volleying had been sharper. But with Andy Murray facing Sam Querrey in Sunday's first singles, the US go into the final day more in hope than expectation."

Great Britain's Davis Cup captain Leon Smith is confident they can secure the one victory needed.

"To go into the final day 2-1 up is certainly a great position to be in," he told BBC Sport.

"It puts us in the driving seat with two rubbers to go and a great chance in both of those to get a win."

Britain's hopes of securing an unassailable 3-0 lead in the doubles ended with a convincing defeat by the Bryans, the world number one pairing.

Captain Smith chose to draft in Inglot for his Davis Cup debut, and the British doubles number one made a nervous start with two double faults and a smash in the net as he dropped serve straight away.

The first set finished in similar style as Fleming double-faulted on set point, and one break was enough for the Americans to take the second set and seemingly close in on victory.

There was still plenty of fight in the British pair, however, and they finally got a break of serve in the third set after some heavy Inglot forehands and a Fleming backhand return took them 4-2 in front.

But Bob and Mike Bryan had lost their past two Davis Cup rubbers and were clearly keen to avoid a hat-trick of defeats, breaking at the start of the fourth and racing through the set in just 15 minutes.

"I think it was Inglot's first Davis Cup match and he brought it. They started playing great in the third set.

"I'm really happy to win this and give our team a chance."