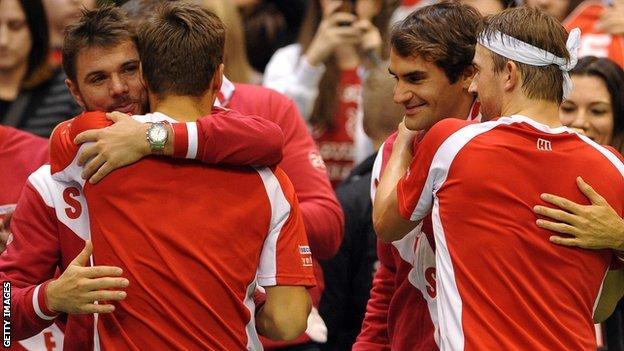 Switzerland beat Serbia to reach the last eight of the Davis Cup World Group for the first time in 10 years.

The Germans face France in the quarter-finals after Richard Gasquet and Jo-Wilfried Tsonga teamed up to secure a 3-0 advantage over Australia.

Elsewhere, Italy and Argentina entered day two of their match level, but Simone Bolelli and Fabio Fognini beat Eduardo Schwank and Horacio Zeballos to give the Italians a 2-1 lead going into Sunday's reverse singles. The winners of the match to play Great Britain or the USA.

Defending champions the Czech Republic took a 2-1 lead over the Netherlands as Tomas Berdych and Radek Stepanek claimed the doubles rubber, while Japan edged in front against Canada in Tokyo.

Belgium kept their hopes alive with doubles victory and now trail Kazakhstan 2-1 with the winners set to face Switzerland in April's quarter-finals.

The Swiss came into Saturday's doubles with a 2-0 advantage after Roger Federer and Stanislas Wawrinka claimed singles rubbers on day one against Serbia in Novi Sad.

Meanwhile, France captain Arnaud Clement said Gasquet and Tsonga were "unbelievable" as they beat Lleyton Hewitt and Chris Guccione 5-7 7-6 (7-4) 6-2 7-5 to set up a tie with Germany that will begin on 4 April.

In Frankfurt, the Germans eased past a Spain team without world number one Rafael Nadal and number five David Ferrer, though Haas and Kohlschreiber had to battle to overcome Fernando Verdasco and David Marrero 7-6 (7-5) 6-7 (9-11) 7-6 (9-7) 6-3.