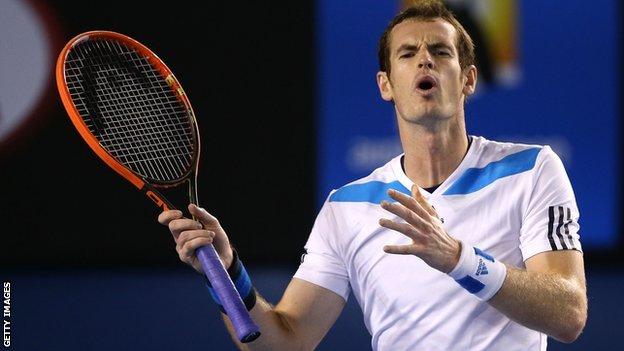 Andy Murray has slipped to sixth in the world rankings after losing in the quarter-finals of the Australian Open.

In his second event after back surgery, the Briton was beaten by Roger Federer, who himself drops two places to eighth.

Nadal has a lead of almost 4,000 points over Djokovic, who in turn is almost 5,000 ahead of Wawrinka.

Fewer than 1,400 points separate the five places between Wawrinka and his fellow Swiss Federer.

Murray, who climbed to number two in the world following his Wimbledon win last year, has slipped to his lowest ranking since August 2008.

In the 12-month period between the summers of 2012 and 2013, Murray's ranking was boosted by his first Wimbledon final, success at both the Olympics and the US Open, a run to the Australian Open final and then victory at SW19.

However, he has only reached the quarter-finals in his last two Grand Slams and, during his surgery lay-off, failed to defend the points he earned by reaching the final of the 2012 Shanghai Masters and the last four of the Tour Finals in the same year.

If he remains outside the world's top four for a significant length of time, he faces the prospect of having to meet Nadal and Djokovic as early as the last eight of Grand Slams and Masters series events.

The next Masters tournament is at Indian Wells in March, an event which Murray will defend the points he gained by reaching the quarter-final last year.

At the following Masters event in Miami, Murray is defending the title and 1,000 ranking points. Anything less than victory could see him lose further ground.

Wawrinka, who was as low as 18th in the world in March of last year, claimed his first Grand Slam title in Melbourne to add to his semi-final appearance at the US Open in September to become Switzerland's number one for the first time.

"Some players realise that it is possible now to win a Grand Slam," said Wawrinka. "Last year, the top 15 players were thinking the four major guys were still amazing players, but we had more chances to beat them.

"We didn't in Grand Slams but we were close to them, so I think we all realised that it can be possible to do something big.

"I don't know about the others but, for me, I have my Grand Slam trophy and no-one can take it away."