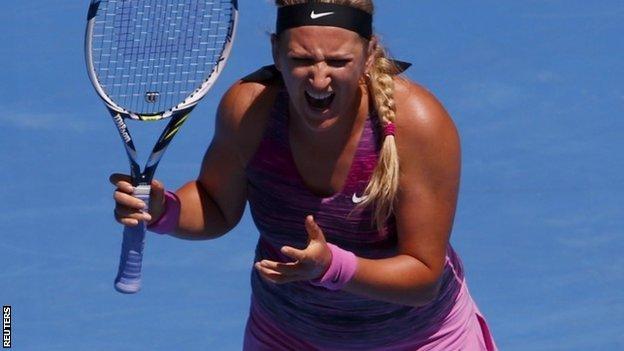 Two-time defending champion Victoria Azarenka is out of the Australian Open after she was beaten in a thrilling quarter-final by Agnieszka Radwanska.

The second seed had won her previous 12 sets against Radwanska but the Pole started superbly, racing into a 5-0 lead before taking the first set.

Azarenka responded to claim the second but the fifth seed hit top form again in the decider to win 6-1 5-7 6-0.

Dominika Cibulkova awaits in the semi-finals after she thrashed Simona Halep.

Azarenka's defeat - the end of an 18-match winning run at Melbourne Park dating back to 2012 - means the top three seeds are out of the women's draw after Serena Williams and Maria Sharapova were beaten earlier in the tournament.

Radwanska has suffered defeats in the quarter-finals of this event in the last three years, but she set about overturning the odds in style, producing some of the best tennis of her career to dominate from the outset.

She looked to have the match in her control when she went a break up midway through the second set, but Azarenka showed all her battling qualities to hit back immediately before breaking decisively as her opponent served to stay in the set.

The momentum seemed to have shifted towards the Belarusian, but Radwanska rediscovered her first-set form, producing a series of jaw-dropping winners to reach the last four.

Victoria Azarenka's exit came a day after Novak Djokovic lost to Stanislas Wawrinka, meaning both defending Australian Open champions were beaten in the quarter-finals for the first time in the Open era

"She was getting to every ball," said Azarenka. "She guessed so many of my shots and I felt like at one point I was being too predictable.

"She definitely took advantage of that. She was solid from the baseline, she came in when she needed to, she served well in the important moments. She was just doing everything a little bit better than me.

"I was just watching. I was like a spectator a little bit."

Radwanska commented: "I'm so happy and pleased, especially that I beat one of the best players in the world.

"It was not an easy draw and not an easy quarter-final. I'm very happy that I made my first semi-final here.

"There were a lot of good rallies, amazing points, running forward, backwards, side to side so many times. I was really feeling good on court - I was feeling I could really do everything, trying and fighting for every point, every ball."

Cibulkova totally outclassed Halep as she reached the second Grand Slam semi-final of her career, five years after her only other appearance in the last four of a major.

The Slovak, seeded 20, provided one of the shocks of the tournament when she beat Sharapova in round four.

And she continued that form against 11th seed Halep, recovering from serving three double faults in one game to take the first set thanks to two breaks of serve.

Romanian Halep was helpless to stop Cibulkova's dominance, finding herself continually pushed back behind the baseline.

And when she was broken in the opening game of the second set, there was to be no way back for Halep, Cibulkova clinching the victory after exactly one hour.

"I have experience of these important matches and I knew how to react on court," said Cibulkova, 24.

"I did everything perfect today. The match against Maria took everything out of me but my fitness is good so I came through."

Hopes of a British junior singles champion ended as both Katie Boulter and Isabelle Wallace went out in the last 16. England's Boulter, seeded ninth, lost 6-2 6-4 to Chinese seventh seed Ziyue Sun, and Scotland's Wallace was knocked out 3-6 6-1 6-1 by Croat Jana Fett.

Jordanne Whiley beat Sharon Walraven of the Netherlands 6-3 6-3 in the wheelchair singles and will meet top seed Sabine Ellerbrock in the semi-finals.

But there were singles defeats for fellow Britons Lucy Shuker,Gordon Reid and Andy Lapthorne.

"I know if I wouldn't be able to do much better than today, it's better to just stop playing tennis." Victoria Azarenka was not overly impressed with her performance against Agnieszka Radwanska

"I did my fourth semester. I just missed one exam to finish the second year, so one exam will be in the third year." Not content with being one of the world's best tennis players, Radwanska spent the off-season going to university

"Obviously I'm not a tall player. I would say I'm the smallest on tour, but I'm pretty quick on my feet." Dominika Cibulkova is officially listed at 5ft 3in tall, which is widely regarded as a bit generous