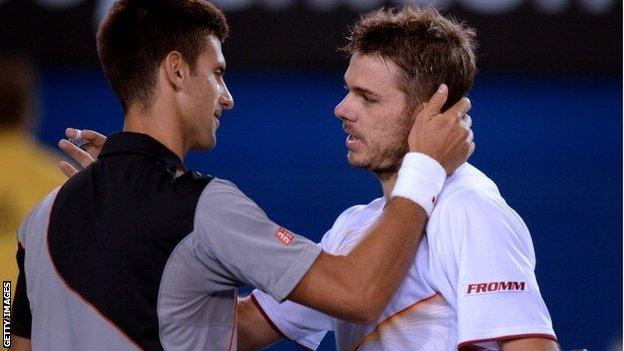 Novak Djokovic is satisfied with the early progress being made under new head coach Boris Becker, despite defeat by Stanislas Wawrinka at the Australian Open.

It was his first defeat since taking on former world number one Becker in December.

"It's been the first official tournament for us. I'm satisfied with things that we've been talking about, working on," said the Serb.

"Of course, it's unfortunate that we finished the tournament in the quarter-finals. But it's the beginning of the season and we'll see what's coming next."

Djokovic had brought back memories of three-time Wimbledon champion Becker when he chose to serve-volley facing match point, only to steer a forehand effort into the tramlines.

"[Wawrinka] had been blocking my serve," said Djokovic. "He'd been chipping the return for the whole match basically.

"And it was actually a good decision. I had a good serve and volley and good volley, but didn't put it away."

Champion run comes to an end

It was also the first time since 2006 that Wawrinka had beaten Djokovic, and gained the Swiss some revenge for five-set defeats at last year's Australian and US Opens.

"He's in great form," said Djokovic. "In the last 15 months he's had the best results. He's established now in the top 10, he's been winning against top players in big tournaments, he won against Murray in the US Open last year.

"So he knows how to play on the big stage. You could feel that with his game. He's really taking it to the opponent and stepping in.

"When you're playing like this, the only thing I can say is congratulations."

Djokovic won his first Grand Slam title on Rod Laver Arena in 2008, and began a spectacular winning run in 2011 that saw him beat Andy Murray in the 2011 and 2013 finals, and Rafael Nadal in an incredible six-hour final in 2012.

"I have to be very proud of my accomplishments in my whole career, and especially in this tournament," said the world number two.

"This is definitely by far the most successful Grand Slam that I have."

He added: "It's an amazing court, probably the court where I have had the most excitement in my tennis career.

"I mean, matches with Rafa, with Stan, last year, this year, some epic battles. I love that court. These are kind of matches that you work for, you live for, you practise for.

"Unfortunately somebody has to lose in the end - this year it was me. I lost to a better player."