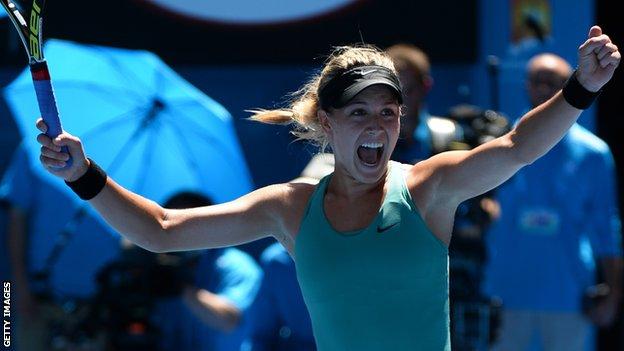 The Canadian, 19, took control after an Ivanovic medical timeout and will face Li Na in the semi-finals after the Chinese star beat Flavia Pennetta.

He will meet Stanislas Wawrinka after the Swiss beat four-time champion Novak Djokovic in a five-set thriller.

British doubles number one Dom Inglot and Treat Huey of the Philippines missed out on a first Grand Slam semi-final, losing 6-7 (3-7) 7-6 (8-6) 6-4 to American Eric Butorac and Raven Klaasen of South Africa.

Ana Ivanovic, conqueror of top seed Serena Williams in the previous round, looked on course to reach the semi-finals when she won the first set, finally ending a run of five consecutive breaks of serve.

An inability to hold serve by both players was to prove a theme throughout, with Eugenie Bouchard in particular struggling when tossing the ball into the sun.

But it was the Canadian, who had never previously made it beyond the third round of a Grand Slam, who came out on top in a second set littered with service errors.

She kept her composure after Ivanovic left the court midway through it for treatment and, as the former world number one struggled, Bouchard asserted herself with some aggressive play.

In the decider, the teenager managed to overcome her previous service wobbles, breaking Ivanovic to lead 3-1 and looking comfortable thereafter.

Asked how she was coping with her new-found level of success, Bouchard said: "It's something I've been doing since I was five years old and working my whole life for and sacrificing a lot of things for. So it's not exactly a surprise. I always expect myself to do well.

"I'm just happy to have gone through this step. I'm not done. I have a match on Thursday. I'm just looking forward to that."

Ivanovic said: "I was battling with my right leg since the beginning of the tournament. Then the left one came on today. Despite all that, I was still on court. I was doing my best. Today she was the better player."

Two-time finalist Li Na raced into a fourth Melbourne semi-final as she produced a ruthless display against Pennetta.

The fourth seed from China broke the Italian in the first game of the match, following it up with two more to lead the first set 5-0.

Pennetta, the 28th seed, stopped the rot with a break of her own but Li still took the opener 6-2.

And the second set was equally one-sided as Li eased to a 6-2 6-2 victory.

Li said her belief that she can repeat her final appearances of 2011 and 2013 has been growing ever since she recovered from being on the brink of defeat in the third round against Lucie Safarova.

"I've got a lot of confidence because I was match point down and I came back to win that match," said the 31-year-old. "I believe in myself even more. I hope I can take one more step this year."

The 2010 Wimbledon finalist ended a streak of three consecutive quarter-final defeats at Melbourne Park, breaking Ferrer in the fifth game of the fourth set and then fending off a break-point chance and holding the crucial subsequent game to hang on for the win.

"It's a really great feeling," Berdych said after his first ever win on Rod Laver Arena.

"There were some special moments which went well together in this match - making it for the first time here in the Aussie Open to the semis, winning my first match on Rod Laver after all those years. That's been a very special match to me. I'm extremely happy to go through."

British doubles number one Dom Inglot and Treat Huey of the Philippines missed out on a first Grand Slam semi-final in heartbreaking fashion.

A desperately tight match looked to have swung their way when they led 4-3 in the final set and had 0-40, but four break points went begging.

Inglot was then broken in the following game, and moments later their unseeded opposition had wrapped up victory after two hours and 16 minutes.

"It's pretty disappointing," said Inglot. "Not in a negative way - obviously those guys played really good points to get themselves out of that game.

"It's not like we had sitters volleys, but there are opportunities you will look back on in hindsight. It's frustrating, no doubt, but you've just got to learn from that."

In the juniors, Isabelle Wallace joined fellow Briton Katie Boulter in the last 16 with a 6-2 6-1 win over Czech Natalie Novotna.

"Justin Bieber." Eugenie Bouchard is understandably surprised to be asked who her dream date would be, immediately after reaching her first Grand Slam semi-final, and keeps it Canadian

"I have a koala, a kangaroo, a kookaburra and a wombat. They skipped the first match. I will create luggage space. It's worth it to take my wombat home." Bouchard keeps track of the gifts showered on her by her fan club, the "Genie Army"

"Some people love the fame. They love it. They embrace it in different ways. For me, I was kind of shy about it." Ana Ivanovic is asked about dealing with fame, something Bouchard is likely to experience

"The racquet is my friend. She is with me on the court all the time, so I have to be friends with her and then she can be good to me." Li Na explains why she treats her racquet well and is unlikely to be seen smashing it in frustration