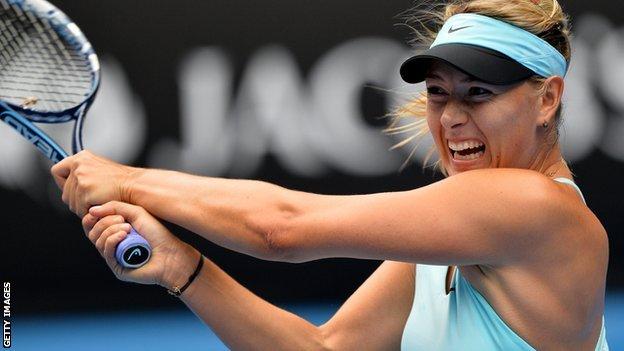 Maria Sharapova followed top seed Serena Williams out of the Australian Open with a shock defeat by Slovakia's Dominika Cibulkova in the fourth round.

Five-time champion Williams was beaten by Ana Ivanovic 24 hours earlier, leaving two-time winner Victoria Azarenka - the second seed - as the player with the most major titles in the draw.

Third seed Sharapova left the court for a medical timeout before the final set, and finished with a total of 45 unforced errors as Cibulkova closed it out in two hours and 12 minutes.

"I have a bit of a strain, the trainer told me, in the hip area," said Sharapova, who was playing only her second tournament since missing the second half of 2013 with hip and shoulder injuries.

"Those aches and pains are expected when you spend a long time on the court. You just have to play through it."

Cibulkova, 24, moves on to face Simona Halep in her first Australian Open quarter-final, the third time she has reached the last eight of a Grand Slam.

"It feels great, especially because I played well and it was a tough match," said Cibulkova, the 20th seed.

"I went on the court and I was more than 100% sure that I really could beat her, and beat her on the big court, in an important match in a Grand Slam.

"I did it before. She knows me and I knew she knew it was going to be a tough match. I was prepared for it."

Cibulkova added she had been "a little bit angry" as she felt the Russian's struggles with her ball toss in the closing stages were "on purpose".

Sharapova had played an epic second-round match on Thursday against Karin Knapp that lasted three-and-a-half hours in temperatures of around 40C.

The 26-year-old's serve had been wildly unreliable in that match but was functioning well enough in the early stages against Cibulkova as she edged the first set.

It did not last, however, as the first-serve percentage dipped in the second and the 5ft 3in Cibulkova leapt gleefully on every opportunity.

The Slovakian's nerve faltered from 5-0 up but she served it out at the third attempt and, after Sharapova returned from getting treatment off-court, dominated the final set.

Seven Sharapova double faults contributed to her demise in the decider and Cibulkova showed no nerves as she matched her French Open victory over the Russian of five years ago.

"It's tough," added Sharapova. "I will be genuine about it. It's never easy. We are very big competitors. I think that's why I have been so successful, because of my competitiveness in the past.

"It's moments like this that ultimately shape you and make you who you are. That's how you bounce back.

"It's easy just to be successful, but it's how many times you're able to come back from the tough moments and losses and injuries that really define who you are as an athlete.

"That's why I'm here, because I believe I still can be up there and certainly can play better, that's for sure."