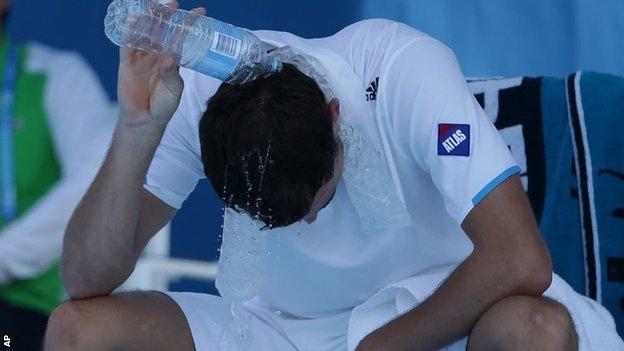 Players need clearer guidance about when severe heat will stop play at the Australian Open, says the new head of the men's tour.

Temperatures have exceeded 40C for four days running, but the "extreme heat policy" has only been used once.

Ivan Dodig feared he "might die" after his match on Tuesday, while Maria Sharapova was concerned about the lack of communication from officials.

"We need to make sure that players are very clear when they step out onto the court about what temperature means the roof goes on or a game is stopped."

Britain's Jamie Murray was another to suffer in the conditions with a bout of heat stroke after his doubles win with John Peers on Thursday,

The four Grand Slam tournaments are governed by the International Tennis Federation [ITF], rather than the men's ATP and women's WTA Tour, and Australian Open officials have insisted this week that conditions are not unplayable.

The Australian Open uses a combination of air temperature, humidity and wind speed (the Wet Bulb Global Temperature reading, or WBGT) - rather than just air temperature - to decide whether conditions are suitable for play.

There is no set number for the WBGT that triggers a halt in play, but a combination of high temperature and high humidity are the conditions that most affect players, spectators and personnel. A WBGT reading of 26 sees ice vests sent to all courts and a reading of 30.1 sees a 10-minute break introduced to women's singles matches, but only at one set all.

The next threshold is at the discretion of the tournament referee and sees the extreme heat policy introduced, when the tournament director can call for play to be suspended at the end of the current set in each match. Play can resume on Rod Laver Arena and Hisense Arena once the retractable roofs are brought across and the air-conditioning is active.

Speaking to BBC tennis correspondent Russell Fuller, Kermode added: "There are so many views on this, even within the players, so there's not a consistent view.

"On our own tour we have a rule where the supervisor has the discretion to play or not play. Player health is of the most paramount importance to me and the governing body, and I continue to talk to all of them and get their views.

"We on our tour have slightly different rules. We have three-set matches, and I think that makes a difference. Generally we play later, and there are rules in place with a bit more flexibility on our tour.

"Each tournament has to make their own and the Australian Open is in charge here. They will know about heat more than anyone.

"We've had exceptional circumstances in the last few days. Just being outside is tough. We'll monitor this, gather information, constantly review it and talk about the best way to approach it in the future."

Australian Open tournament referee Wayne McKewen has the ultimate say as to whether play is suspended at Melbourne Park.

The decision is made according to the Wet Bulb Globe Temperature [WBGT] reading, a combination of heat, humidity and wind speed.

A WBGT of 26 prompts ice vests to be despatched to all courts, and at 31.6 all women's singles matches get a 10-minute break between the second and third sets.

However, there is no break in the men's matches, and no set WBGT that triggers the "extreme heat policy", which sees all matches on uncovered courts halted at the end of the set in play and roofs brought across on the two main show courts.

That situation arose for the first time this year on Thursday, but not on Friday, when the air temperature was similarly punishing.

It was 37C when play started at 11:00 and, in the first match of the day on Rod Laver Arena, the temperature rose to almost 40C as world number one Serena Williams needed 80 minutes to progress with a 6-3 6-3 win over Daniela Hantuchova.

"Today actually wasn't as hot," said the American, who was in action before the day's highest temperature of 42C. "I think it was hotter yesterday, so it wasn't as bad."

The temperature is forecast to drop dramatically from Friday evening, with a high of 23C predicted on Saturday and Sunday.

"I definitely look forward to playing in the cooler conditions," added Williams. "I think the players that I have played, they have done really well in the heat. I just look forward to some cooler weather."