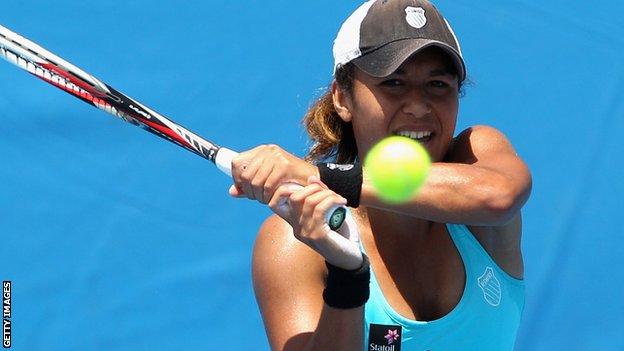 Heather Watson secured her place in the main draw at the Australian Open with a tense win over American Irina Falconi.

Watson is currently ranked 120th after a disappointing 2013, blighted by a bout of glandular fever.

"It would have been the end of the world if I didn't get through," said the 21-year-old from Guernsey.

Watson is defending significant points in Melbourne, having reached the third round last year.

Defeat in qualifying this time would have come as a major blow both to her ranking and her confidence, but she battled through in two hours and three minutes.

"I'm very happy that I am through but this is where it starts," said Watson.

"I've just got over that first hurdle and there's a long way to go yet."

After admitting to feeling nervous in her opening two qualifying matches, the tension was ratcheted up against Falconi.

The 23-year-old American is a friend and practice partner of Watson, who knew she would have to face a mixture of slice, volleys and lobs.

Watson failed to serve out the first set at 5-3 but looked to be on course when she clinched it with a clever backhand slice in the following game.

The Briton recovered an early break in the second and fired down three aces to save break points at 3-3, but when two match points arrived she failed to keep the ball in play and the nerves took hold.

There appeared every chance that Falconi would take the match into a deciding set, but the American faltered in the tie-break with an early double fault, and Watson reeled off seven straight points to clinch a vital win.

"It was a very tricky match," added Watson. "She's not your usual WTA player. She slices a lot, she's got good hands, good touch, she's not the overpowering type.

"I was finding it difficult to find the balance but I held my nerve at the end - at the very end!

"I got a bit nervous closing it out but it's last round of qualifying; there's a lot on that match."