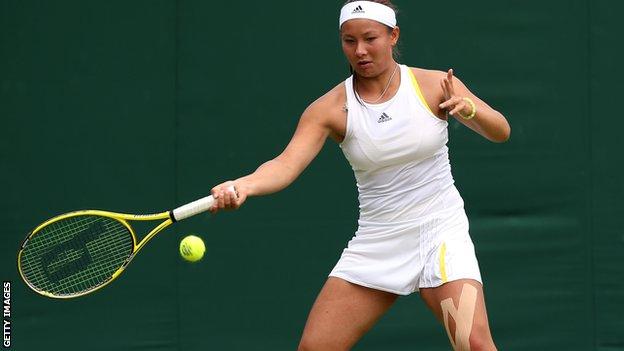 Tara Moore is set to make her Fed Cup debut after being called up by Great Britain for the 2014 opener next month.

Moore, ranked 212 in the world, is named alongside Laura Robson, Johanna Konta and Heather Watson in a team where all four are aged 22 or under.

Britain will compete in the 17-nation Europe/Africa Group I in Hungary.

The prize at stake is a World Group II play-off - the stage at which Britain were eliminated from the competition in 2012 and 2013 - to take place in April.

Moore, 21, made her Wimbledon debut as a wildcard entry last year, losing 7-5 5-7 7-5 to Estonia's Kaia Kanepi in the first round of the women's singles.

She will join up with Britain's squad for the Fed Cup event in Budapest, which starts on 4 February. Teams will be split into four groups and the winners of each will battle for two places in the World Group II play-offs.

Great Britain, who have not played a home tie since 1993, have lost at the play-off stage against Sweden and Argentina in the past two years.

"Our aim in 2014 is to win through to the World Group II, which would give us a number of home and away ties," said GB captain Judy Murray, who picks the team.

"That would really help us to promote women's tennis through this fun team competition."

British number one Robson, 19, pulled out of the Hobart International on Monday with a left wrist injury, hampering her hopes of playing at next week's Australian Open.

National number two Konta and number three Watson, both 22, were part of the team - alongside Robson - which progressed to the World Group II play-offs last year.

But GB were beaten 3-1 by play-off opponents Argentina in Buenos Aires, with Watson missing the tie through illness.