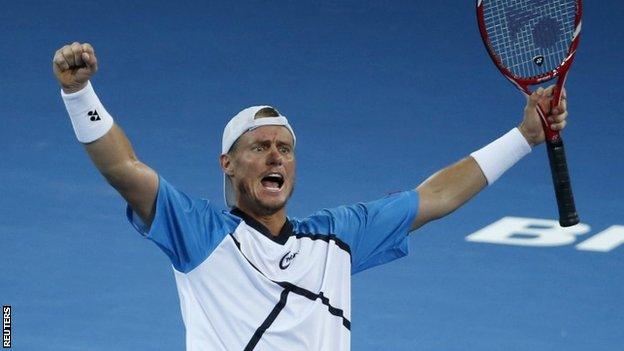 Australian Lleyton Hewitt won his first title since 2010 with a three-set victory over top seed Roger Federer in the Brisbane International final.

Swiss Federer, also 32, was broken three times in the first set but the 17-time Grand Slam winner fought back to level against the world number 60.

Federer, who has not won a Grand Slam tournament since Wimbledon in 2012, added six-time Grand Slam winner Stefan Edberg to his coaching team in December.

And Hewitt, finalist in Melbourne in 2005, said: "If I play like I did this week I have a chance of doing damage to some serious players.

"It gives me a lot more confidence going out there believing in how well I'm hitting the ball at the moment and that I can match up with the best guys."

Hewitt will move back into the top 50 in the world rankings as a result of his victory over Federer, who had not lost a game on serve before the final.