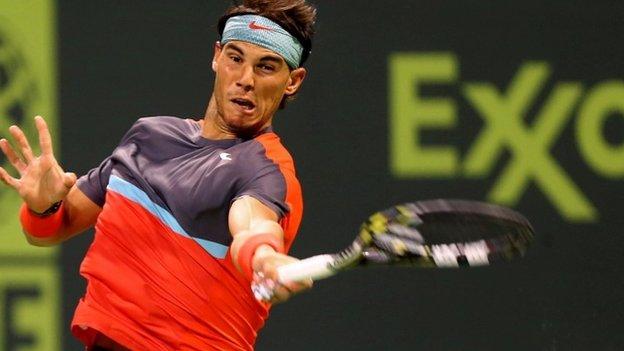 The Spaniard was in inspired form in the opening set, taking it in just 23 minutes.

But although Monfils led 3-0 in the second set, Nadal fought back before the Frenchman edged the tie-break.

Monfils was then broken at 1-2 in the decider and Nadal held on to win his 61st career title.

"Every victory is important and the title today means a lot to me. It is the first time in my career that I am able to start the season with a victory. That's always important," he said.

Nadal, who had struggled at times in some of his matches this week, was well on top in the first set as Monfils looked shell-shocked.

However, the Frenchman, who had looked the better player on his way to the final, upped his game from the start of the second set with some powerful groundstrokes but saw his advantage disappear as Nadal regained his composure to get back into the match.

But in the tie-break, a misplaced lob by Nadal gave Monfils a 4-2 advantage and he held onto that lead to force a decider.

After the excitement of the second set, the third set failed to live up to expectations and a Monfils error, when a forehand went long, put Nadal 3-1 up.

Nadal saved four break points in the next game and from then on he did enough to win his first title in Doha and give him the perfect boost ahead of the Australian Open, which starts on Monday 13 January.

It is also the first time the 27-year-old has won his opening tournament of the year.