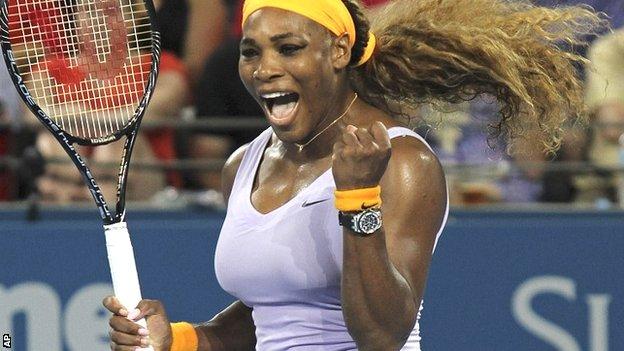 The 32-year-old American, who won 11 tournaments in 2013, lost her serve twice in the second set but broke back three times to triumph in 98 minutes.

It was her 14th win in 17 meetings with Azarenka, whom she beat in last year's US Open final for her 17th Grand Slam.

Williams is a five-time champion in Melbourne but has not won the title since 2010.

The straight-sets defeat of Belarusian Azarenka, 24, extended her run of successive victories to 22 and ensured she went through the tournament, in which she beat world number four Maria Sharapova in the semi-finals, without dropping a set

Victory in Brisbane was the perfect start to the new year after her impressive record in 2013, in which she won 78 of her 82 matches and had a career-best run of 34 consecutive wins, which was ended by Sabine Lisicki in the fourth round at Wimbledon.

Elsewhere, Serena's sister Venus Williams, seeking her first title for more than a year, lost 6-2 5-7 6-4 to Ana Ivanovic in the final of the ASB Classic in Auckland, ending hopes of both sisters winning a WTA title in the same week for the first time in 15 years.