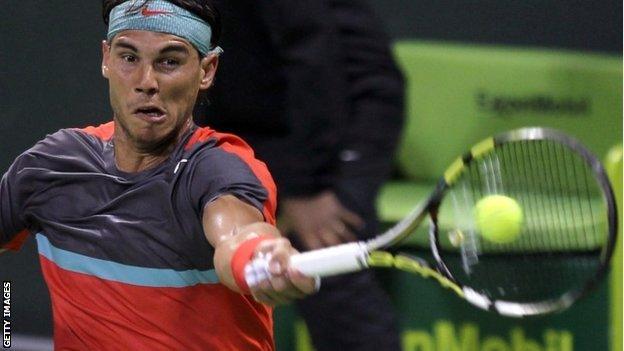 World number one Rafael Nadal continued his smooth start to the season, beating Latvia's Ernests Gulbis 7-5 6-4 to advance to the Qatar Open semi-finals.

The Spaniard, who won the French and US Opens last year after a long injury lay-off, trailed 3-0 in the second set in Doha before fighting back to win.

"I'm thinking about Doha, not looking ahead to Australian Open," said Nadal.

He will play Peter Gojowczyk next after the German qualifier's 6-3 3-6 7-6 (7-5) win over compatriot Dustin Brown.

Gojowczyk is ranked 161 places below Nadal and had only won one match on the ATP World Tour before Doha.

"I'm so happy to be in the semi-finals, it's an unbelievably good feeling," said the 24-year-old from Munich. "2014 is beginning great for me."

On the other side of the draw, Florian Mayer backed up Wednesday's win over Andy Murray with a 6-4 6-7 (8-10) 6-4 victory against Romania's Victor Hanescu.

Mayer will face Gael Monfils in the last four after the Frenchman saw off Germany's Daniel Brands 6-2 6-1.