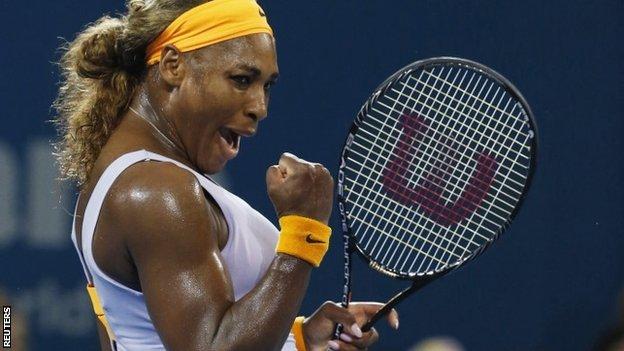 Serena Williams proved too strong for Russian Maria Sharapova as she ground out a 6-2 7-6 (9-7) win to make the Brisbane International final.

The world number one landed just 40% of her first serves, but was more accurate with her groundstrokes, shaking off the dogged Sharapova in the tie-break.

An erratic Victoria Azarenka overcame former world number one Jelena Jankovic 1-6 6-3 6-4 in the other semi-final.

The top-seeded Swiss was detained for just over 57 minutes by Australia's Matosevic and will play France's Jeremy Chardy next.

Kei Nishikori of Japan will play Lleyton Hewitt in the other semi-final after wins over Marin Cilic and Marius Copil respectively.

Despite sharing a schedule with perennial crowd favourite Federer and Australian veteran Hewitt, it was the meeting between Sharapova and Williams that was given top billing on the Friday's order of play by the Brisbane organisers.

Sharapova has not beaten Williams since 2004 and trails 15-2 in their head-to-head meetings, but, after missing much of the second half of 2013 to sort a long-standing shoulder injury, there were plenty of positives for the Russian and new coach Sven Groeneveld.

Williams, after cruising through the first set, had to find another gear when she came under pressure at 3-1 down in the second set.

The American met the challenge with deep, powerful returning which reclaimed the break and recovered a second for 4-4.

Sharapova showed that her steely streetwise court craft and steely competitive edge had not been dulled by her absence as she saved a match point in the tie-break with a shrewd play at the net.

But the booming but uncharacteristically wayward serve of Williams eventually proved decisive as she closed out with her seventh ace.

Earlier in the day, Azarenka, who lost four of her last five matches in 2013 following defeat in the US Open final by Williams, made a poor start to her semi-final, surrendering her serve to Serbia's Jankovic at the first three times of asking.

After failing to salvage the first set, the Belarusian world number two faced three break points in the opening game of the second, but a stooping half-volley winner saw off the danger and shifted the momentum of the match.

As Jankovic struggled in the heat, Azarenka surged to the brink of victory. But the strain showed again on the 24-year-old's serve at the end of the match as she conceded serve with a double fault at 5-2 up, before finally sealing her place in the final two games later.