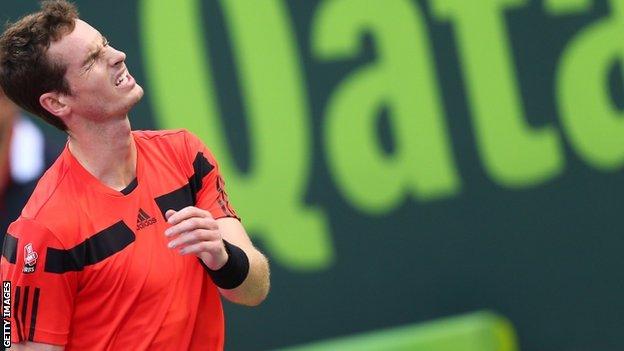 Wimbledon champion Andy Murray suffered a setback on his return from injury as he lost in three sets to Germany's Florian Mayer at the Qatar Open.

Murray, playing his second tour match since recovering from back surgery, was beaten 3-6 6-4 6-2 in the second round.

The Scot, 26, had led by a set and 3-0 but won just three more games as Mayer took control.

Murray and Serbia's Nenad Zimonjic then lost 7-6 (7-5) 6-4 to Alexander Peya and Bruno Soares in the doubles.

"I am stiff and sore but that's to be expected," said Murray. "It's more the joints rather than muscles. I have to get used to changing direction and playing at this level again.

"I didn't have high expectations because I have not had many matches. I was playing well and moving well at the beginning. I lost two matches but got through without any niggles or injuries."

After Doha, Murray will head to Melbourne for the Australian Open, which begins on 13 January. He will go into the year's first Grand Slam having played two exhibition and two ATP Tour singles matches.

The Briton had enjoyed the easiest of tour comebacks on Tuesday when he 6-0 6-0.

But Mayer, ranked 40th, posed a far tougher test and took control from a set and 3-0 down, reeling off five straight games in the second and dominating the decider.

Murray had looked well set for at least a quarter-final place in Doha after an impressive start against Mayer, moving freely and bristling with positive intent as he moved into a commanding lead.

Mayer, 30, had lost all three of their previous meetings and his challenge appeared to be fading once again, until he hit a rich vein of form midway through the second set.

Five games in a row helped the German level and Murray, forced into a third set for the first time since Britain's Davis Cup win over Croatia in September, ran out of steam in the decider.

Mayer served superbly in the closing stages and wrapped up victory after one hour and 51 minutes.