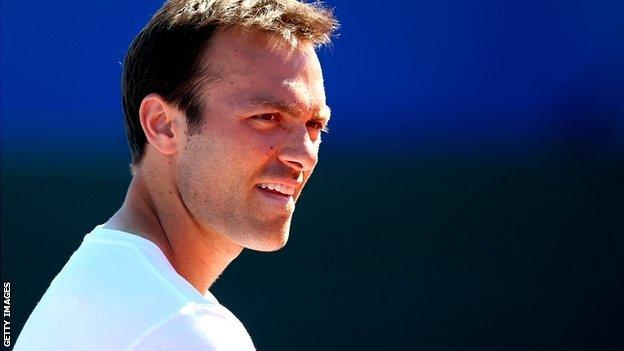 Ross Hutchins returned to competitive tennis after more than a year out with illness as he and Colin Fleming lost in the Brisbane International first round.

The British pair were beaten 0-6 6-4 10-4 by Frenchman Jeremy Chardy and Grigor Dimitrov of Bulgaria.

Hutchins, 28, was playing for the first time since being in December 2012.

The Englishman and spent the second half of last year preparing to return to action.

Scotland's Fleming spent most of 2012 playing with Jonny Marray, but finally reunited on court with long-standing partner Hutchins on New Year's Day.

Hutchins and Fleming will now head to Melbourne for the Australian Open, which begins on 13 January, with Great Britain's Davis Cup tie in the United States at the end of the month another objective.

There was British doubles success in Brisbane on Wednesday as Jamie Murray and Australian John Peers defeated Kevin Anderson and Robert Lindstedt 4-6 7-6 (7-2) 14-12 to reach the semi-finals.

Roger Federer began 2014 with a 6-4 6-2 win over Finland's Jarkko Nieminen and the Swiss, who struggled with a back problem last year, said: "Now it's just down to forehands and backhands and tactics and movement.

"That's kind of what you want it to be, because unfortunately it hasn't always been that way last year with my issues."