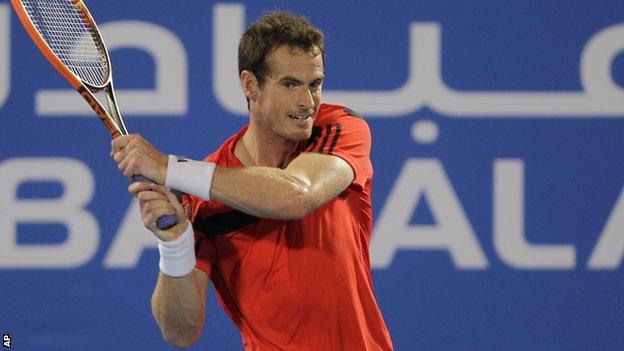 Murray featured in exhibition games in Abu Dhabi recently in his first action since back surgery in September.

But the 2013 Wimbledon champion made his competitive comeback against Zayed, ranked 2,129th in the world, and lost just seven points in the opening set.

The Scot will play Germany's Florian Mayer for a place in the quarter-finals as he continues his preparations for the Australian Open, which begins in Melbourne on 13 January.

"It's good to be back," he said. "I will probably go and hit a few balls with my coach now as it was quite windy and there were not a lot of rallies in the match."

Murray, 26, lost to Jo-Wilfried Tsonga in the Mubadala World Tennis Championships in Abu Dhabi on Thursday in his first outing since Britain's Davis Cup World Group play-off win over Croatia in September.

But the 2013 BBC Sports Personality of the Year then beat Stanislas Wawrinka in the same exhibition event.

Britain's Dan Evans went out in the opening round as he lost in three sets to Latvia's Ernests Gulbis.

Evans, the world number 150, had come through three rounds of qualifying to make the main draw, but was unable to spring an upset against the seventh seed.

World number one Rafael Nadal progressed with a 6-2 7-6 (9-7) victory against Lukas Rosol, the Czech player who beat him at Wimbledon 2012.