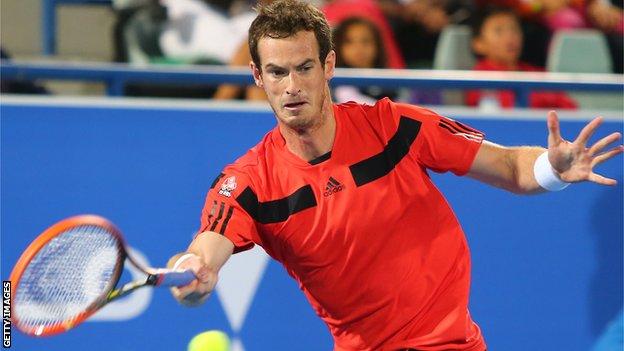 British number one Andy Murray lost on his return to action after undergoing back surgery in September.

The 26-year-old, who was recently named BBC Sports Personality of the Year, lost 7-5 6-3 to Frenchman Jo-Wilfried Tsonga in the Mubadala World Tennis Championships in Abu Dhabi.

Murray has not played since Britain's Davis Cup World Group play-off win over Croatia in September.

He will now face Stanislas Wawrinka in the fifth-placed play-off on Friday.

Murray was due to return to action last month at the Dream Cup exhibition in Barbados but the event was cancelled, so he continued training at his Miami base.

"I moved well in the first set [against [Tsonga], especially once I got into the rallies," he told The National newspaper.

"I didn't feel slow at all. In the second I slowed down slightly, but that's something that is going to get better by playing matches.

"I can't expect to feel great for long periods of matches straightaway.

"But it was a good workout. You want to play your best, but you need to be realistic and patient.

He added: "I was hitting the ball OK, moving well for the most part.

"Moving is the most important thing. I just need to be able to do it for a longer period. I just felt like I hadn't played a match for a while."

Tsonga, 28, went into the match with an 8-1 career deficit in competitive matches against Murray.

"It's not often I take two sets off Andy, even in practice," said the Frenchman, who himself has been struggling with a knee injury.

In the other match, Spaniard David Ferrer beat Wawrinka 7-5, 6-1 to set up a meeting with world number one Rafael Nadal.