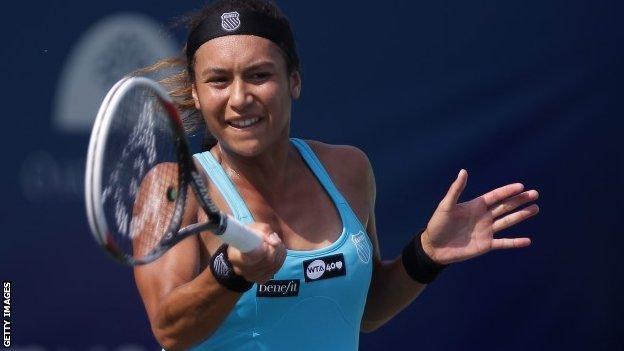 Watson's ranking has slipped to 121st in the world after a season which has seen her suffer a bout of glandular fever and change coach.

"My role model happened to be Ronnie O'Sullivan, just because he inspired me," she told BBC Sport.

However, the British number three said it doesn't matter who aspiring young sportsmen and women choose as role models, so long as they are inspired to play sport.

"It doesn't even have to be an athlete or a famous person, it can be somebody within your family, your tennis coach or your teacher at school."

When asked why young women may be less keen to be involved in sport, Watson said: "I think a lot of girls are just shy to be athletes or do sporty things and sweat because you've got to be all girly and cute all the time.

"If you get out there and you get all sweaty, I think it's really cool. It's letting the girls know that it's absolutely fine to play sport."

Watson peaked at 39 in the world in early 2013, but has since tumbled out of the top 100 as she suffered a number of early round exits.

Laura Robson is currently the highest ranked female Briton at 44, with Johanna Konta at 114.

Watson split with Colombian Mauricio Hadad in July and worked with Jeremy Bates for the US hard court stretch.

She has not had a coach since the end of a 2013 campaign, but this month she appointed Argentine Diego Veronelli as her new coach ahead of the 2014 season.

The Briton added: "Getting ill and getting glandular fever this year was just an obstacle. It's done now, it's finished.

"It happens, people have setbacks. I'm definitely looking forward to putting it behind me and starting fresh in the new year.

"It never crossed my mind that I wanted to quit tennis, I just love it too much and it's such a huge part of my life, so that could never happen."