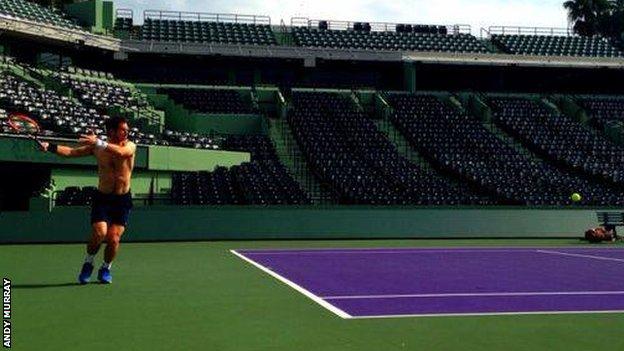 Wimbledon champion Andy Murray's return to action following back surgery has been delayed after the Dream Cup exhibition in Barbados was cancelled.

Murray had been ready to take part in the event, starting on 28 November, along with Juan Martin del Potro, Richard Gasquet and Nicolas Almagro.

The cancellation means Murray will continue training at his Miami base.

Murray, 26, underwent back surgery in September and returned to the practice court for the first time last week.

He published a photograph on his official Facebook page on Tuesday with a caption that read: "Sun is shining, back on the courts."

Next week's scheduled return to action in Barbados was called off on Thursday after Gasquet withdrew with an elbow injury.

A statement from the tournament said: "When notified of Richard Gasquet's injury, attempts were immediately made to secure a replacement player of equal calibre, but unfortunately these were unsuccessful, as contingency players had already confirmed alternate plans at this late stage."

Murray's next appearance on court is planned to be against Jo-Wilfried Tsonga in an exhibition in Abu Dhabi on 26 December, with his competitive return set for Doha the following week.

The Scot has not yet confirmed that he will be ready to play in the Australian Open, which begins on 13 January. He has finished runner-up three times in Melbourne, losing the 2013 final to Novak Djokovic.

A lingering back problem forced him to withdraw from the French Open in May, but he recovered to become the first Briton to win the Wimbledon men's singles title since Fred Perry in 1936.

After his US Open title defence ended in the quarter-finals, Murray chose to end his season in September and have surgery on his back.