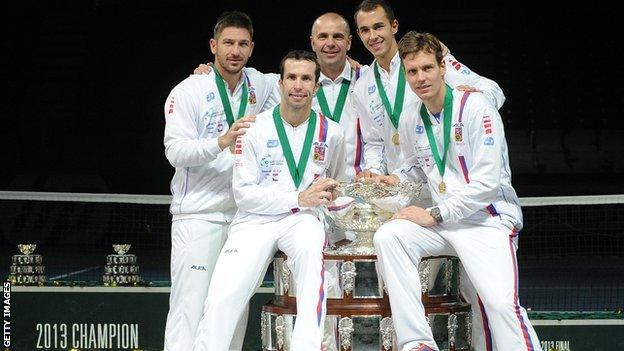 Radek Stepanek won the decisive rubber against Dusan Lajovic as the Czech Republic beat Serbia to retain the Davis Cup in Belgrade.

The world number 44 was too strong for his lower-ranked opponent, winning comfortably 6-3 6-3 6-1.

Stepanek said: "To win two Davis Cups is my greatest achievement. To defend this trophy means the world to us."

The Czech Republic became only the fifth country to retain the Davis Cup since the formation of the World Group stage in 1981.

They won it for the first time as Czechoslovakia in 1980, before a 32-year wait for their next success.

Stepanek added: "The match was the same [as last year's final], under the biggest possible pressure that can be.

"But I knew that I would want to use the experience from last year's final against him. Besides the first game, I controlled the match. I think I played in my best form ever this weekend."

Lajovic, ranked 117 in the world, was a late replacement for the hosts after Janko Tipsarevic was ruled out with injury on Thursday night, but the 23-year-old had 17,000 noisy Serbian fans on their feet when he broke Stepanek in the opening game.

However, it turned out to be the high point of the match for Lajovic, as his more experienced opponent highlighted the gulf in class between the two players.

Stepanek combined his baseline and volleying skills to good effect and was mobbed by his team-mates when he sealed victory after one hour and 52 minutes.

Earlier on Sunday, Serbia's Novak Djokovic had beaten Tomas Berdych in straight sets to level the tie at 2-2.

"It was so close, so tense, especially in the second set where one point decided it," said Djokovic, 26. "It could easily have gone the other way."