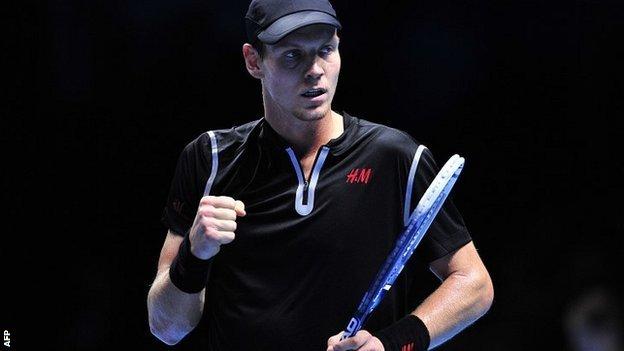 Tomas Berdych reignited his hopes at the ATP World Tour Finals with a straight-sets win over David Ferrer.

A 6-4 6-4 victory in Group A brought the Czech back into contention for the semi-finals, after he lost his opening match to Stanislas Wawrinka.

Berdych, 28, will play world number one Rafael Nadal, who is already through to the last four, in his final round-robin match on Friday.

Wawrinka can still take the second qualifying spot but Ferrer is out.

Berdych has lost his last 15 matches against Nadal, and his last win came back in 2006.

"Matches against him are always like a final because you're playing the number one player in the world," said Berdych.

"Every time you go on court with him it's amazing. It's already many, many matches that he's won [against me] and I need to do something about that."

Ferrer, 31, has been trying to cap his best year by finishing as the world number three, but the number of matches he has played has taken its toll in London.

The Spaniard admitted as much after losing his opener against Nadal, and Tuesday saw him take to the court for the 83rd time this year - more than anyone else on the ATP Tour.

Without his usual energy at the baseline to draw upon, Ferrer struggled to counter the powerful hitting coming at him.

"Ferrer's body always looks like it's willing, but it looks as if his mind needs to think about something else for a while.

"Three finals in his last three tournaments has caught up with him, but all credit to Berdych for taking his opportunity and keeping his qualification hopes alive."

Two break points slipped by Berdych at 3-3 but he made the breakthrough at 4-4 when he fired a forehand into the corner and followed up with an easy volley, closing out the set with another dominant service game.

Ferrer clung on in the face of two more break points at the start of the second, and began to work his way into the match as Berdych's power dimmed for a while.

The Czech's unforced-error count passed 30 for the match midway through the set but his potent first serve kept things ticking over as the 17,000 spectators struggled to get engaged in the contest.

At 4-4, Berdych went hard at the Ferrer serve and created three break points with a searing backhand return, converting his second opportunity when the Spaniard leaked a forehand wide.

There were no late alarms for the world number six, who cracked an ace out wide on his second match point and raised his fist in triumph after a comfortable 83 minutes' work.

"The serve was working really well today and I think that was the key, especially for my game," said Berdych.

"When I make a lot of points from the serve I feel much better from the back of the court."

Six-time champion Roger Federer will be in action against Richard Gasquet on Wednesday in the afternoon session (14:00 GMT) while defending champion Novak Djokovic takes on Juan Martin Del Potro in the evening (20:00 GMT).