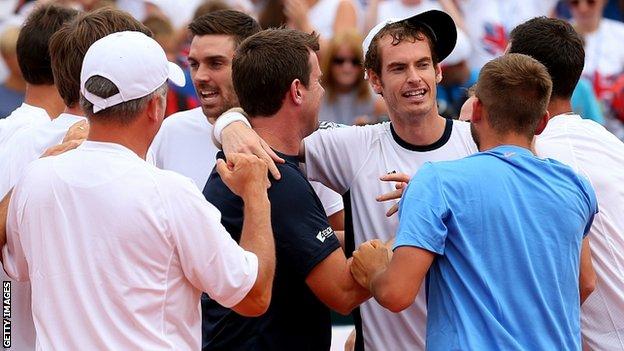 Great Britain Davis Cup captain Leon Smith says it may be an advantage for his team to play the World Group tie with the United States on a clay court.

Petco Park, home of baseball's San Diego Padres, will host the match between 31 January and 2 February 2014.

It is the first Davis Cup tie in an open-air US baseball stadium, and the first US home tie on clay since 1992.

"We have players who play quite a full clay-court schedule, so I think it might work in our favour," Smith said.

USA aiming for five wins out of five v GB

Great Britain have not beaten the United States since 1935, with the USA winning the last four meetings between the two countries

The match will be played on a temporary court in an arena that will seat about 8,000 people.

Smith added: "I've seen a few of the pictures of it and what the design might look like and it looks pretty exciting. I think it's a novel idea and certainly something we'll be looking forward to.

"I'm a little bit surprised they have put down clay as an option for themselves.

"All four of those players who are likely to play, if it's the Bryans [Bob and Mike], or [John] Isner, or [Sam] Querrey, their best shot is their serve, so it certainly gives our players a little bit more time on that which will help."

Britain returned to the tennis elite after an Andy Murray-inspired win over Croatia in September, which was also played on clay.

Murray, 26, has begun rehabilitation work following an operation on his back in the same month.

Asked whether the Wimbledon champion would be fit for the tie, Smith said: "I think the most important thing is Andy's health and getting back for that first event.

"He is due to play Doha [in late December/early January] and then Australia and we won't really know until he is back in full swing. I have seen him in the last couple of days. He is working extremely hard and making sure he leaves no stone unturned to get back on court."

USA captain Jim Courier said: "Andy Murray is one of the strongest players in the sport and we expect our home crowd to come out and support us in what will be a thrilling Davis Cup tie.

"Our squad is ready to go up against a tough adversary in the British squad."