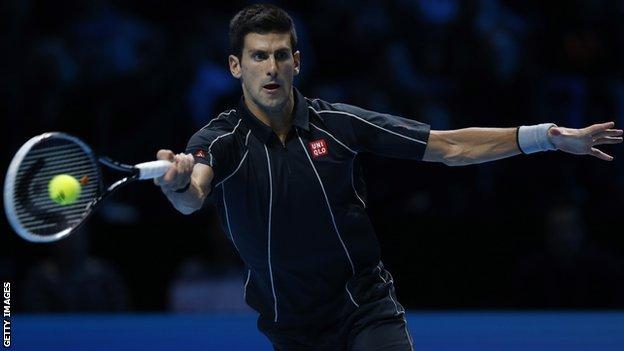 Novak Djokovic beat Roger Federer for the second time in three days to get his ATP World Tour Finals defence off to a solid start.

The result keeps alive his slender hopes of ending the year as world number one.

"It was a big challenge physically," Djokovic told BBC Sport. "Only 48 hours ago, I was playing in Paris so to be able to play this well and beat Roger is incredible.

"First of all, I have to enjoy the win and then think about the recovery because it's a big win. The good thing is, there is a day off. I'm going to try and recharge my batteries mentally and physically and get ready for [Juan Martin] Del Potro."

With 23 Grand Slam and eight ATP Finals titles between them, Djokovic and Federer provided the first real heavyweight clash of the week in London, and there was hardly a spare seat to be found among more than 17,000 spectators.

Federer, 32, remains a huge draw despite slipping to seventh in the rankings this year, something the Swiss has put down largely to a back injury he has now recovered from.

Djokovic, 26, had said before Tuesday's match that he thought Federer was "maybe slower" these days, and the Serb had recent experience having beaten him on the way to winning the Paris Masters last week.

Footwork might have a played a part at the O2 Arena, but on the face of it, Federer just could not match Djokovic for consistency from the back of the court at the key moments.

After a tight opening 20 minutes, the Swiss created the first chance at 4-4 only to narrowly miss with a forehand down the line that was close enough to bring a huge cheer from his army of fans.

Amid all the noise, the line judge's arm crept out and the opportunity slipped by.

If that wayward forehand was a disappointment, the next one was a disaster as Federer fired wildly into the tram lines to hand over the set after 37 minutes.

In a gripping, if uneven, 20 minutes of action, Federer twice broke to move ahead in the second set but was pegged back each time, missing set point with another loose forehand at 5-4.

It was Federer's more attacking instinct that dominated the tie-break, however, and a screaming forehand winner that barely brushed the line proved the key moment as he moved 4-2 clear and reeled off the next three points.

Djokovic had won the Paris title only 48 hours earlier and appeared to be flagging, but that thought was quickly banished at the start of the decider as the irrepressible Serb immediately broke to love and then fended off one final Federer break point.

The defending champion accelerated towards the finish line by winning a lung-busting 30-shot rally to break again for 4-1 and, now serving superbly, closed out the match with a love game to take his winning streak to 18 matches.

"The surface is slow here and it's the first match, so there's going to be errors," said Federer.

"You have to take a lot of chances to get the ball past Novak, eventually that draws errors out of you.

"I think Novak also struggled for a long period of time. So did I.

"I'm not even sure if we played our best in the third. It's just one of those matches you try to take advantage when the other guy is not 100%."