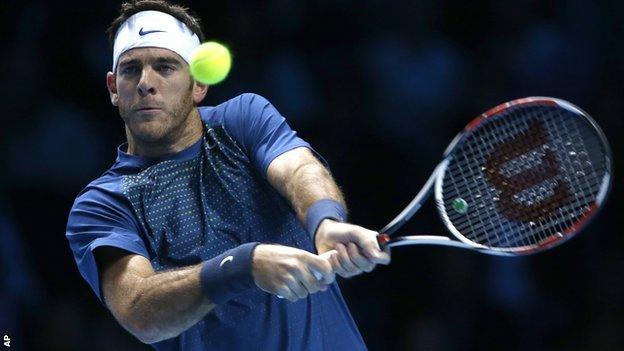 In front of a near-capacity crowd of around 17,000, the Argentine took his record since the US Open to 16 wins in 18 matches.

Novak Djokovic and Roger Federer meet in the same group on Tuesday.

"Hopefully I can beat them [Novak Djokovic and Roger Federer] but it's going to be really tough for me. I don't have anything to lose against them," said Del Potro as he looked ahead to his remaining Group B matches against Djokovic and Federer.

"Richard has an unbelievable backhand and he is a good fighter. This tournament means a lot to me. In the end, I played solid."

On a day when both Djokovic and Rafael Nadal had suggested the season finale should leave London when the current contract expires in 2015, Del Potro and Gasquet put on a show that lit up the arena.

Gasquet was the tournament outsider as the eighth seed and faced a daunting start against the 2009 runner-up, against whom he had a 1-5 record.

The Frenchman, 27, showed he was up for the fight from the outset, winning a 32-stroke opening rally, but made little impact on the Del Potro serve until the eighth game.

Two loose errors from the Argentine opened the door for Gasquet, who broke with a flowing backhand down the line, but the advantage was handed straight back with a poor attempt to serve out the set.

Gasquet, playing at the O2 Arena for the first time, regained his composure by saving a break point in game 11 with an ace, and then grabbed the lead when he edged the tie-break with a brilliant forehand winner.

Del Potro, 25, had increasingly been on the back foot as Gasquet attacked his second serve, regularly chipping and charging, but the 6ft 5in Argentine wound up the power in the second set.

Trailing 40-0 in game three, Del Potro unleashed two huge forehand winners that would have rocked Gasquet on his heels had the Frenchman got close to them, and three points later the Argentine had the break.

Gasquet missed a chance to put the pressure on at 15-30 when Del Potro served for the set, the world number nine netting a smash with the court gaping, and the match was all square moments later.

When the Frenchman's brilliant backhand began leaking errors and gave up the break at 4-3 in the decider, his evening looked to be at an end, but there was another unexpected twist to come as Del Potro was broken to love when serving for the match.

At 5-5, the tension was more in keeping with a final than a first round, and Del Potro ballooned a forehand long on his 10th break point of the match before an overrule dramatically kept Gasquet alive on the 11th.

Del Potro was not to be denied, however, pounding away with his backhand to force the error and earn a second chance to close out the match.

A heavy serve brought Del Potro victory after two hours and 23 minutes, but Gasquet had done enough to suggest that he too could trouble Djokovic and Federer.

"I think I took a little confidence after this match," said Gasquet.

"Of course, I'm a little bit disappointed because I was really close to winning.

"It was important for me to win the first match. Now I need to play two big players again, so it's very difficult.

"The level is very high, so every match is a final for me."