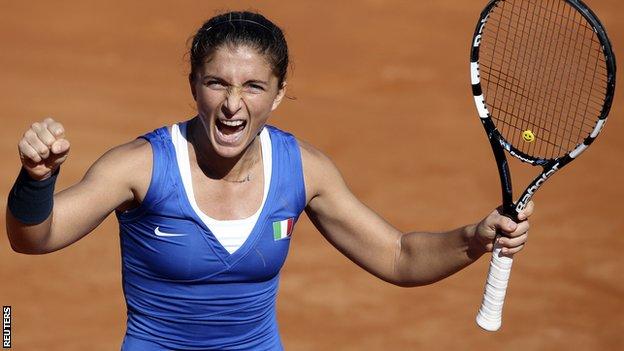 World number seven Errani breezed to a 6-1 6-1 triumph on the clay of Cagliari to seal victory against their weakened opponents, with two ties to play.

"The format of the Fed Cup may be opaque, and its scheduling far from straightforward, but it has to be in the long-term interests of everyone in the sport to have one team competition that can be promoted, nurtured and celebrated - for at least another 50 years."

Italy seized control of the final on Saturday after going 2-0 ahead.

Injuries, retirements and a scheduling clash had denied four-time winners Russia many of their star players.

World number four Maria Sharapova was ruled out with a shoulder injury, Ekaterina Makarova was not fully fit, Svetlana Kuznetsova and Nadia Petrova no longer play Fed Cup matches, while Maria Kirilenko, Elena Vesnina and Anastasia Pavlyuchenkova all chose to compete in the WTA Tournament of Champions in Sofia.

Errani was rarely troubled by her 183rd-ranked opponent in Sunday's opening game, with the Italian ending the contest in style as she broke Kleybanova's serve after the Russian fumbled a return into the net.

The final concludes with Roberta Vinci's singles' meeting with Irina Khromacheva and a doubles rubber between Flavia Pennetta and Karin Knapp and Kleybanova and Margarita Gasparyan.