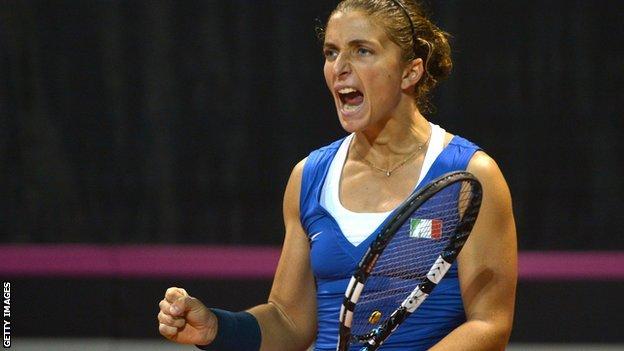 Italy dominated the first day of the Fed Cup final to open up a 2-0 lead over Russia on the clay of Cagliari.

Roberta Vinci battled to a 5-7 7-5 8-6 victory over Alexandra Panova before Sara Errani breezed past Irina Khromacheva 6-1 6-4.

Errani has the chance to give Italy a fourth title when she meets Panova in the first of Sunday's reverse singles.

A combination of injuries, retirements and a clash with the WTA Tournament of Champions has weakened the Russia team.

"The format of the Fed Cup may be opaque, and its scheduling far from straightforward, but it has to be in the long-term interests of everyone in the sport to have one team competition that can be promoted, nurtured and celebrated - for at least another 50 years."

Maria Sharapova has a shoulder injury, Ekaterina Makarova is not fully fit, Svetlana Kuznetsova and Nadia Petrova no longer play Fed Cup matches, while Maria Kirilenko, Elena Vesnina and Anastasia Pavlyuchenkova are all competing in the Tournament of Champions in Sofia.

World number 136 Panova, the Russian number 12, has not won a match on the WTA tour since February but took the first set against 13th-ranked Vinci and led 5-3 in the second.

Vinci forced errors to level the match but again had to fight back to 5-5 in the third set, with a break in the 14th game deciding the contest.

"When I played aggressively, it was much better. At the end, it was important to get the win," said Vinci after her three-hour 13-minute encounter.

Errani, the world number seven, had a more straightforward win against Khromacheva, ranked 236, wrapping up victory in only 85 minutes.

Should Panova prolong the tie with a win over Errani, Vinci is due to meet Khromacheva before the final concludes with a doubles rubber between Flavia Pennetta and Karin Knapp and Kleybanova and Margarita Gasparyan.