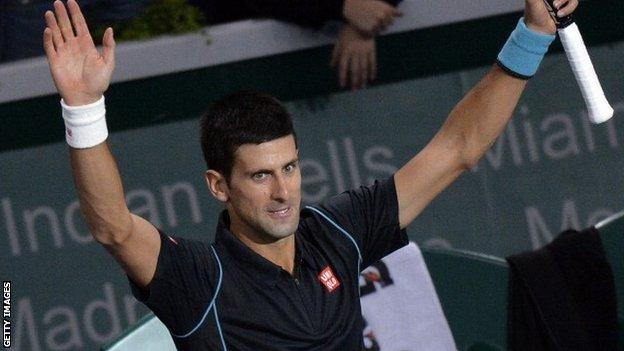 Serbia's Novak Djokovic overcame a challenging first set against qualifier Pierre-Hugues Herbert to reach the third round of the Paris Masters.

Djokovic saved two set points in the first set and saw off a rally from Herbert in the second before wrapping up victory in 93 minutes.

He was joined in the third round by home favourite Richard Gasquet, who beat Fernando Verdasco 7-5 (7-6) 6-3.

Gasquet's victory over the Spaniard boosts the world number nine's chances of qualifying for the season-ending ATP World Tour finals next month.

World number seven Roger Federer will qualify for the end-of-season event should be win his match in Paris on Wednesday, which will be against South Africa's Kevin Anderson or Russia's Mikhail Youzhny.

But there will be no British representatives in the finals after Dominic Inglot and Jamie Murray lost their respective doubles matches in Paris.