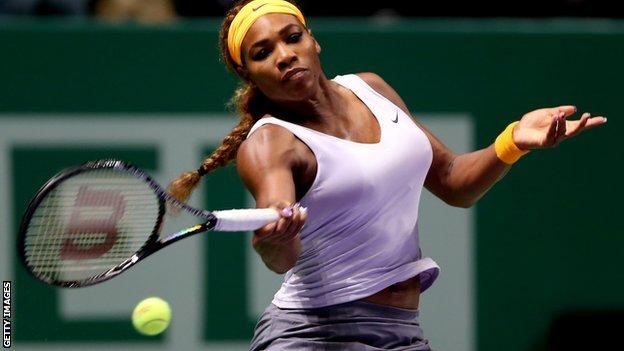 As if winning 11 titles in a year was not enough misery to inflict on the other members of the world's top 10, Serena Williams made it very clear at the WTA Championships in Istanbul that there's plenty more to come.

"Not that I didn't do that before, but it was just different. I was just at a different place in my life, and more than anything I enjoy playing tennis. I love being out there.

"Right now, I can't imagine my life without a tennis racquet in my hand."

If you measure success purely in Grand Slam terms, then Serena has had more profitable seasons. She beat her sister Venus in the finals of the French Open, Wimbledon and the US Open in 2002 before completing the "Serena Slam" at the following year's Australian Open.

But 2013 has been her most complete year, and should be considered among the best years ever put together by an individual athlete.

Williams won 78 matches - 20 more than she has managed in any previous season - and lost only four times. Over the course of the season she distributed 6-0 thrashings as freely as politicians kiss babies in the run-up to elections.

The world number one now appears to be in control not just of her opponent, but also her own emotions.

Officials at the US Open have felt the sharp end of her tongue in recent years, but a more serene Serena has been on display this season, and it came as quite a surprise when she clearly demonstrated the tiredness she felt in her Istanbul semi-final against Jelena Jankovic.

She has also added more variety to her game. At the US Open, Martina Navratilova pointed out how the 17-time Grand Slam winner can now prolong rallies with greater use of spin, and therefore cut down a little on those higher-risk winners.

Her coach since Wimbledon of last year has been Patrick Mouratoglou, and he gave an insight into the changes he has made to Williams' game.

"The surfaces now are much slower than they were 10 years ago, so you cannot play the same tennis with the same efficiency," he told BBC Sport.

"If you want to be able to keep a level all year round, you need to play more percentage tennis. So, you have to be fit enough to run down more balls, and to hit more balls in every rally if necessary.

"But she shouldn't forget what her strengths are - the aggressive tennis that nobody else has probably ever played in the sport.

"It's very important to have a Plan B as you can't play your best tennis every day. When you are tired or sick, or having a bad day, you have to be able to win.

"I think she also added some shots that she wasn't using that much in the past because she hadn't mastered them enough. She's worked a lot to become a more complete player."

Mouratoglou admits it probably wasn't easy for Williams to invite him into her inner circle "because it was a family business from the start". But, having asked to hit some balls at the Frenchman's Parisian academy after her shock first-round defeat by Virginie Razzano at Roland Garros 2012, Williams liked what she heard.

She called Mouratoglou when she got to Wimbledon and suggested they work together some more.

"I am prepared to work 20 hours a day or do whatever it takes to bring my player to the next level. I just expect the same from the player," Mouratoglou added.

"With most professional players, once they achieve results which make them feel comfortable, they don't feel like pushing to go to the next level.

"Definitely with Serena she has the necessary ambition to push herself out of her comfort zone every day just to achieve better. And she's never satisfied - which is probably what makes the champions different from other players."

How long will Williams play for? She thinks she will schedule one or two fewer tournaments next year, but has also suggested that the 2016 Rio Olympics are on her mind.

There is plenty more history to be written. She is currently only one Grand Slam title behind Navratilova and Chris Evert, and five behind Steffi Graf's Open era record of 22.

Outside interests distracted her in the middle part of her career, but rivals should not take much solace from the fact that she has a lot of business projects on the go, and is relaunching her clothing line.

According to Williams, tennis helps her relax; it takes her mind off the stresses and strains of the working day.