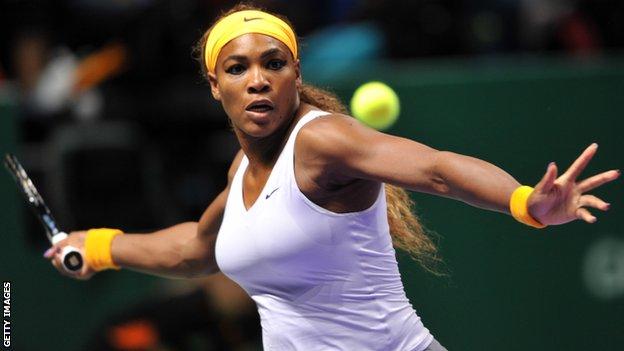 World number one Serena Williams beat Czech fifth seed Petra Kvitova 6-2 6-3 to progress to the semi-finals of the WTA Championships in Istanbul.

The 32-year-old American advances with a 100% record in the Red Group.

"Williams only needed to win one set to make sure of her place in the last four, but the thought wouldn't have entered her mind as she knocked the stuffing out of Kvitova. Lethal serving and some meaty and deep returns made the Czech look ineffectual, and she ended with only five games to her name. So can anyone beat Serena? Li Na looks the most likely from the other group, but she has only one success in 10 career meetings with the world number one."

China's Li Na leads the White Group after beating Jelena Jankovic 6-3 2-6 6-3 in the first three-set match of the tournament at the Sinan Erdem Dome.

It was Li's second victory from two round-robin games after Wednesday's 6-3 7-6 (7-5) win over Italy's Sara Errani.

Serbia's Jankovic and Belarusian Victoria Azarenkahave both won one match and lost one in the White Group, while Errani has been beaten twice.

Germany's Kerber will face Kvitova in the only remaining tie in the other pool, with a place in the semi-finals the prize for the winner.

Polish third seedRadwanska exits after three defeats in the end-of-season tournament in Turkey, which features eight of the top nine in the WTA rankings, with world number three Maria Sharapova absent through injury.

American Williams, already guaranteed to end the season on top of the world rankings, is aiming to win the event for the fourth time and become the first player since Justine Henin in 2007 to retain the title.