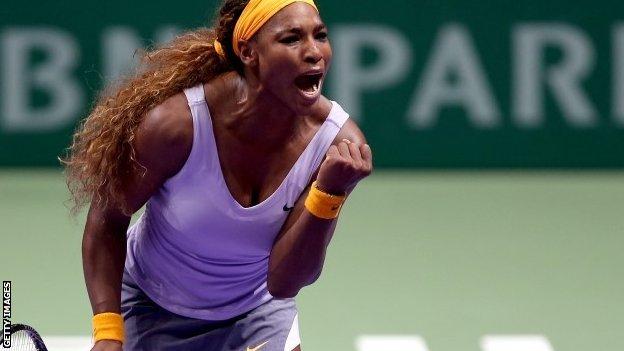 World number one Serena Williams beat Agnieszka Radwanska for an eighth successive time to close in on the semi-finals of the WTA Championships.

American Williams won 6-2 6-4 in Istanbul to record her second win in Red Group with one more round-robin match to play, against Petra Kvitova.

Eight in a row

The tournament brings together the top eight players in the world, with the top two players from each group of four qualifying for the semi-finals.

With two wins, 32-year-old Williams is all-but assured of a place in the last four but was pushed hard by her Polish opponent, who was only able to convert one of the eight break points she created.

"She definitely played pretty well but I can always look to improve on some things," said Williams. "My serve wasn't as good, but you can't expect it to be great every day."

"Jankovic was a thoroughly deserved winner. She kept the ball on a tight leash throughout, and an off-colour Azarenka wasn't able to stay in key rallies for long enough. The Australian Open champion says she has run out of gas and, from the way she was talking, there doesn't seem much chance of the tank being replenished before 2014. Li Na played well to win her opener against Errani, and may end Azarenka's season a fraction prematurely when they meet on Friday."

The former world number one, playing in the tournament for the first time in three years, said: "I was so excited to qualify and give myself a chance to play against the best players in the world once again.

"Beating Vika will give me a lot of confidence going into the next matches."

Azarenka won her opening match against Italian Errani and faces Li in her final group match on Friday, knowing she can still reach the semi-finals.

Li, who failed to get past the group stage in 2011 and 2012, opened with a sixth win in six matches against Errani, converting her third match point after being taken to a second-set tie-break.

"I still have to find the rhythm on the court," said Li who took a three-week break before the tournament.