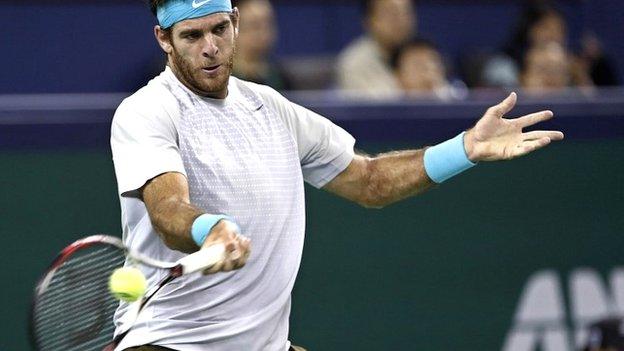 Nadal had not lost his serve in the tournament but was broken in his first service game as Del Potro moved 4-0 up.

The Argentine, 25, displayed majestic power and Nadal was unable to gain a single break as a high-class contest ended in an hour and 46 minutes.

It was only the second time during an incredible season in which he has won 10 titles that Nadal - the French and US Open champion - has failed to reach the final of a tournament he has entered. The only other occasion was his shock first-round exit from Wimbledon.

But the 13-time Grand Slam champion was given the run-around by the 2009 US Open champion, who launched a sustained all-court attack, out-hitting his illustrious opponent to gasps from an enthralled crowd.

"I played so solid all the time, hitting the ball so hard," said Del Potro, who also secured his place at next month's World Tour Finals in London.

"I saw Rafa playing very far off the baseline, which is good for my game, for my serve, and confidence. That's the way to beat this guy.

"I didn't make too many aces but that's what I need against Djokovic. I need to win easy points with my serves.

A rueful Nadal, who could not convert any of his six break-point opportunities, conceded Del Potro deserved victory.

Djokovic, 26, twice broke to love in the first set against Tsonga and won it in 34 minutes.

The Frenchman was seeking to pass Roger Federer in the quest for an automatic spot in next month's World Tour finals but was beaten in one hour 33 minutes.

Tsonga had already moved up from 11th to ninth in the race for the World Tour finals, which is effectively the last of the eight automatic places because of third-ranked Andy Murray's withdrawal through injury.

He had not lost a set en route to the last four and was bidding to reach only his third Masters final, his first outside of his native France.

But he started slowly and two double faults led to him losing his opening service game as Djokovic, who lost the world number one ranking to Nadal last week, raced 3-0 ahead.

Tsonga, whose sole Masters title came in Paris five years ago, broke back but lost the set after Djokovic's third break.

The second set was more competitive and Tsonga levelled at 4-4 when, on the first of two break points, Djokovic allowed an attempted pass from Tsonga by. The ball was called out but the decision was reviewed and it was shown to have clipped the line, prompting an explosive outburst from the Serb.

Djokovic regained his composure to complete his 11th victory in 16 matches against Tsonga and reach his seventh final of the season, extending his winning run in China to 19 matches.