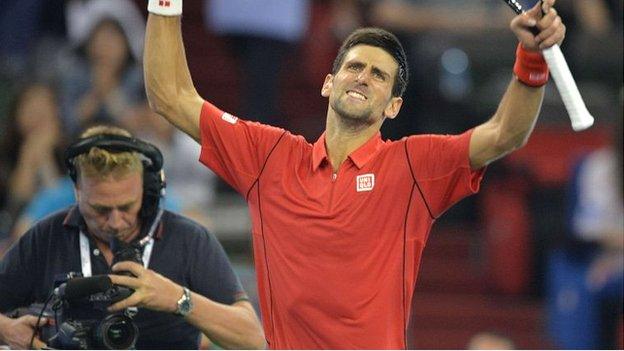 Novak Djokovic stayed on course for a fourth final meeting of the season with new world number one Rafael Nadal after overcoming Gael Monfils 6-7 (4-7) 6-2 6-4 in the Shanghai Masters last eight.

Djokovic, 26, lost a gruelling first set on a tie break, but fought back as Monfils, who beat Roger Federer on Friday, argued over a time violation.

The Serb will face another Frenchman, Jo-Wilfried Tsonga, in the semi-finals.

Race for the World Tour Finals

Switzerland's Wawrinka had lost his previous 22 sets against Nadal, but had the Spaniard on the ropes in the opener, before he was finally edged out by the deftest of drop-shots.

Wawrinka continued his resistance into the first game of the second set, however Nadal proved too strong and cantered to victory having successfully defended all four break points he faced in the match.

After Tsonga had moved into the final qualifying spot for November's ATP World Tour Finals with a 6-2 6-3 victory over Germany's Florian Mayer, Juan Martin del Potro booked his meeting with Nadal courtesy of a 6-3 6-3 win over Nicolas Almagro.

Djokovic, who trails potential final opponent Nadal 22-16 in their career head-to-head record, insisted that he remained confident of progressing despite losing the opening set against Monfils.

"He's one of the best movers we have on tour but he's not physically very fit," said Djokovic of Monfils.

"I knew after dropping the first set that he wouldn't be able to hold that level so I just had to hang in there and stay tough and wait for my chances."

Monfils, who reacted angrily after being warned over slow play following a slip, said that injury to his stomach muscles had put paid to his chances of claiming a first win in nine meetings with Djokovic.

"I get a bit scared with my abs. It was tough for me to serve full bore. For sure, against Novak, it's impossible to win if not serving 100 percent.''

Britain's Jamie Murray could ensure his family are represented at the World Tour Finals after his younger brother and Wimbledon champion Andy withdrew from the event through injury.

Jamie and his Australian partner John Peers beat Robert Lindstedt and Vasek Pospisil 3-6 6-3 10-6 in a champions tie-break to reach the semi-finals.

If they win the title, they will move into one of the eight qualifying positions for the doubles event at London's O2 Arena.