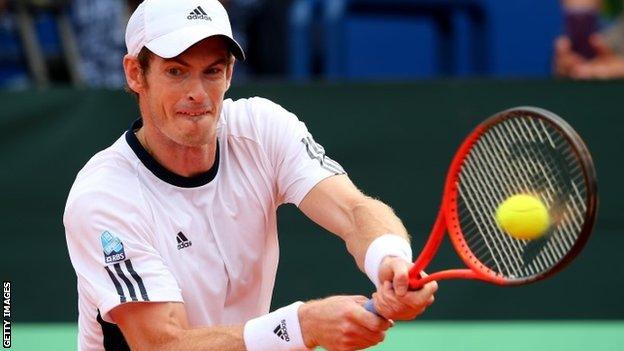 Britain's Andy Murray has withdrawn from the season-ending ATP World Tour Finals in London as he continues his recovery from back surgery.

The Wimbledon champion had a minor operation in September to correct a disc problem in his lower back.

"I'm really disappointed not to be playing this year," said Murray. "I love playing in front of my home crowd, it's a great atmosphere.

"I'll be doing my best to qualify again for the tournament next year."

"It's the worst possible year for the World Tour Finals to be missing the Wimbledon champion, but as soon as Murray made the decision to have surgery on his back, his thoughts shifted entirely to next season. He has already begun back strengthening exercises, and by the middle of November should be in Miami to begin his annual, and very intense, training block. Exhibitions in Barbados and Abu Dhabi will help remove a little of the rust, and Murray should be in much better state, both physically and mentally, by the time of the Australian Open."

Murray pulled out of the French Open in May because of the injury before recovering in time to become Britain's first male Wimbledon singles' champion since 1936.

His defence of the US Open was ended in the quarter-finals but he helped Great Britain beat Croatia in the Davis Cup before having surgery. He tweeted a picture of himself in hospital with his thumbs up after the operation.

Tournament director Andre Silva said: "It's unfortunate Andy will be unable to play in this year's tournament. He's had a historic year on the tour and of course he'll be missed.

"We wish him all the best as he continues his recovery from surgery and we hope to see him back stronger than ever for the 2014 season."

World number one Rafael Nadal has qualified for the event at London's O2 Arena, which features the world's top eight singles players and doubles teams.