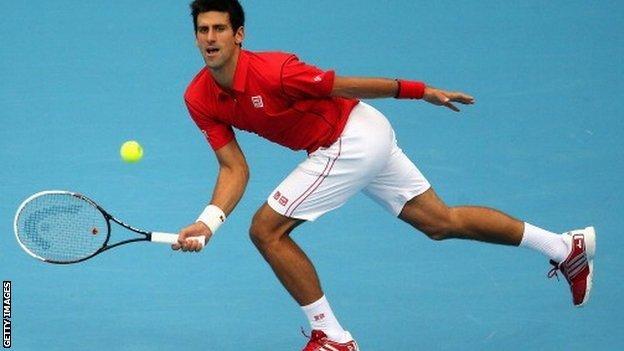 Novak Djokovic clung on to his world number one ranking by beating Spain's Fernando Verdasco in the second round of the China Open in Beijing.

Defeat for the Serb would have seen Rafael Nadal replace him at the top of the rankings, but Djokovic overcame a blip to beat Verdasco 7-5 2-6 6-2.

The 26-year-old will face American Sam Querrey in the quarter-finals.

The rankings will change. They change all the time. Over the years that has been the case

In the women's draw, there were victories for top seed Serena Williams and third seed Agnieszka Radwanska.

World number one Williams recovered from going a break down in both sets to secure a 7-5 7-5 third-round win over Russian Maria Kirilenko.

But while Williams is assured of ending the year as world number one, Djokovic will be usurped by Nadal at the top of the men's rankings should the Spaniard reach the final - or if Djokovic fails to win the title.

Djokovic easily grabbed the opening set 7-5, but was in trouble in the second as he was broken twice, allowing Verdasco to level the match.

The Australian Open champion admitted he lacked concentration midway through the match before going on to seal victory in one hour and 54 minutes.

"I had some chances in the start of the second set and I managed to allow him to come back to the match and start playing well," said Djokovic.

"I try to do what I need to do and that is to win the matches. The rankings will change. They change all the time. Over the years that has been the case. You can't think too much about it."

In the doubles, Britain's Colin Fleming and Jonathan Marray lost 6-4 7-6 (7-3) to Belarusian Max Mirnyi and Horia Tecau of Romania.