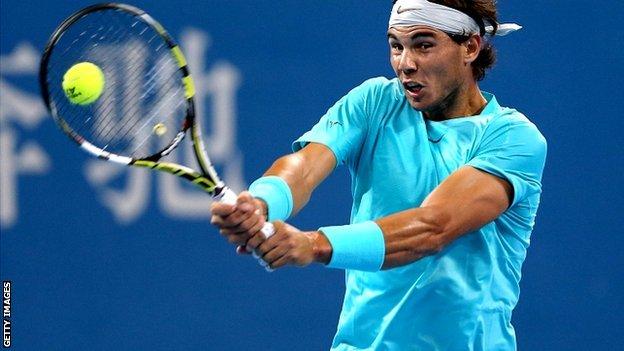 Rafael Nadal took another step towards regaining the number one ranking with a hard-fought win over Philipp Kohlschreiber at the China Open.

Nadal will replace Novak Djokovic as number one if he reaches the final, or the Serb fails to win the title.

Nadal beat Kohlschreiber on his way to victory at the US Open last month but was taken to four sets in New York, and the German tested him once again at China's National Tennis Centre.

After getting the better of five breaks of serve to edge the first set in 58 minutes, Nadal fought off three break points in the second before taking control of the tie-break.

"Today the serve, in my opinion, helped in the important moments," said Nadal. "But it's true that his level of tennis I think was just brilliant tonight.

"I won because I played a great match. If not, I would not be here with a victory.

"He [Kohlschreiber] played great. I didn't serve bad, but his return was amazing.

"When you have a player in front of you that has decided to play completely aggressive, and the balls are going with the right directions, it's very difficult to stop."

Radwanska took one hour and 15 minutes to beat 18-year-old American Madison Keys 6-3 6-2, while Li impressed in front of her home crowd with a 7-5 6-4 win over Wimbledon finalist Sabine Lisicki.

Germany's Andrea Petkovic, the world number 43, followed up her opening win against top seed Victoria Azarenka with a 4-6 6-4 6-1 victory over former US and French Open champion Svetlana Kuznetsova.

"This is the first tournament that I've been able to really keep up my intensity and keep up my focus. I think I played two good matches," said Petkovic, who has been beset by injuries in recent years.

"For me, just personally, it's really important to see that I can still beat the players on the top level, two past Grand Slam champions."