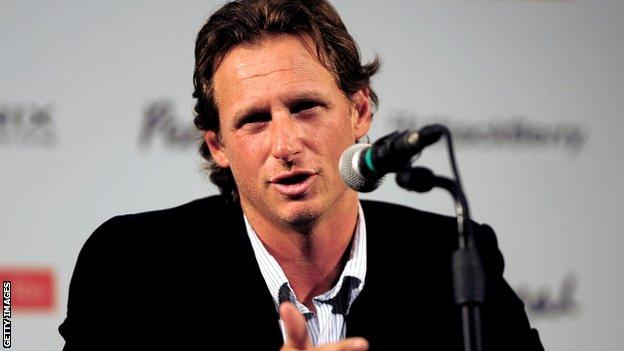 Former Wimbledon finalist David Nalbandian has retired from tennis because of a shoulder injury.

The 31-year-old Argentine, who reached a career high of three in the world rankings in 2006, was runner-up to Lleyton Hewitt at Wimbledon in 2002.

Nalbandian reached the semi-finals or better at all four Grand Slam tournaments during his career.

He was also disqualified after kicking an advertising board into a line judge's shin at Queen's Club in 2012.

"It's not easy what's happening to me now, my shoulder is not helping me to train as I should for the circuit," he said.

Nalbandian, from Cordoba, has slipped to 231 in the rankings after numerous injuries, the latest of which saw him undergo shoulder surgery in May and led him to announce his retirement in Buenos Aires on Tuesday.

He has played just 11 matches in 2013, although made it to the final of the Brazil Open in March, losing to Rafael Nadal.

Nalbandian is five months younger than Roger Federer and enjoyed some of his best moments against the 17-time Grand Slam champion, beating him in the US Open junior final before winning their first five matches as professionals.

The Swiss would eventually turn that around, and leads their head-to-head 11-8 as Nalbandian retires, but the Argentine's five-set win at the season-ending Masters Cup in 2005 remains a high point of his career.

He played a leading role in Argentina's recent attempts to win the Davis Cup for the first time but fell short in three finals, against Spain in 2011 and 2008, and Russia in 2006.

"It's the event that I felt was different from the others," said Nalbandian. "The pressure, the support of the people. It's something unique. It's a shame [Argentina] couldn't win it, but it's the way it was."

Another highlight was his victory at the 2007 Madrid Masters, where he beat Nadal, Novak Djokovic and Federer in succession.

Nalbandian's final appearance will be an exhibition match against Nadal on 23 November in Buenos Aires.