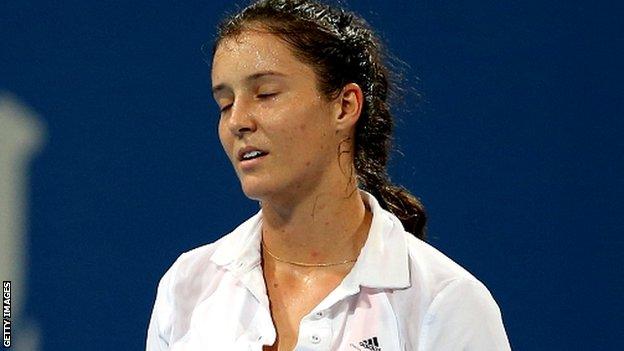 Laura Robson's challenge at the China Open has ended with a second-round defeat against Angelique Kerber.

The British number one, ranked 38th in the world, was struggling from the start after losing her opening service game against her German opponent.

Robson, 19, made too many errors against the world number nine and lost 6-1 6-2 in just over an hour.

Elsewhere, women's number one Serena Williams was given a tough match by Francesca Schiavone but won 6-4 7-5.

Caroline Wozniacki, Sloane Stephens, Roberta Vinci, Petra Kvitova, Carla Suarez Navarro and Sabine Lisicki, who thrashed Venus Williams 6-1 6-2, also made it through to the third round.

Schiavone had won just one game when the pair met at the US Open last month, but Williams had expected a tougher test in Beijing.

Rafael Nadal: "If I'm able to keep playing well every day and at the same level I played the last couple of months, I will have the chance to be there, to be number one in the future."

"It didn't surprise me," said the American. "I was definitely more surprised that I played so well in the Open, but it was a different circumstance.

"Even though the scoreline looked much easier at the Open, it wasn't an easy match. But as for Francesca playing so well today, I wasn't surprised about that."

Meanwhile, in the men's draw, Rafael Nadal eased to a 6-2 6-4 first-round victory over Colombian qualifier Santiago Giraldo as he bids to regain his world number one spot.

Nadal can rise to the top of the men's rankings if he gets to the final in Beijing, or if current number one Novak Djokovic fails to win the tournament.

"It's true that the things went unbelievable so I had the motivation to finish the season well," said Nadal.

"That's what I am going to try. I have an opportunity to finish the season with good feelings. There are important tournaments left to play, and here is one of those tournaments.

"If I'm able to keep playing well every day and at the same level I played the last couple of months, I will have the chance to be there, to be number one in the future."

Djokovic, however, appeared determined to hold on to his top billing as he brushed aside Lukas Rosol in 54 minutes with a 6-0 6-3 win.

"I needed to be very fresh from the start and try to bring that intensity, positive intensity to the court, and that's what happened," said the Serb.