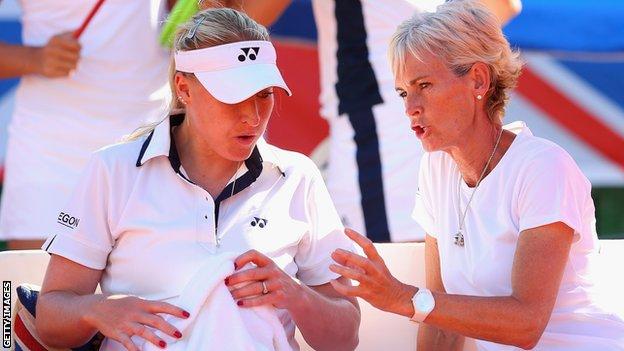 Great Britain will begin their 2014 Fed Cup campaign in Budapest next February as they look to reach the World Group, after missing out in 2012 and 2013.

Britain, captained by Judy Murray, will compete in the 17-nation Europe/Africa Group I in the Hungarian capital.

The prize at stake is a World Group II play-off in April - the stage at which Britain lost to Sweden and Argentina in the last two years.

A play-off could see Britain play a home tie for the first time since 1993.

Laura Robson, Heather Watson and Johanna Konta are likely to figure in Murray's selection in Budapest, where teams will be split into four groups and the winners of each will battle for two places in the World Group II play-offs.

Britain has successfully negotiated the Europe/Africa Group I stage for the last two years, when it was played in Israel, but last year's campaign ended with a 3-1 defeat by Argentina in Buenos Aires in the subsequent play-off.

British number two Watson missed the tie against Argentina with illness and was replaced by Elena Baltacha, while Anne Keothavong will not feature in 2014 as she has retired.

A total of 17 countries, including Belgium, Croatia, Netherlands and Belarus, will compete in 2014 when the Europe/Africa Group I moves to Budapest.

It will take place on indoor hard courts at the Syma Event and Congress Centre from 3 February.