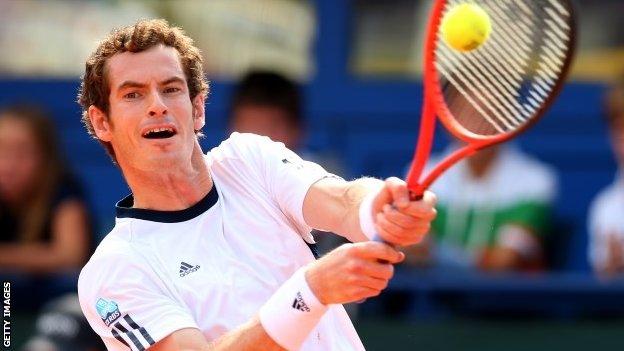 Andy Murray gave Great Britain the lead in their Davis Cup play-off in Croatia but the hosts levelled the tie at the end of the first day of action in Umag.

"Dan Evans's attractive array of strokes, and especially that sliced backhand, just don't pack the same punch on clay, and he was soundly beaten by Ivan Dodig.

"Dodig is Croatia's number 1 in the absence of Marin Cilic, and he looks as if he is rising to the challenge of being team leader.

"Andy Murray was never in any danger against Borna Coric, but the 16-year-old showed bags of class and temperament, especially in the first set.

"Murray says his back is sore, so Leon Smith must now decide whether he should be risked in Saturday's doubles."

The doubles takes place on Saturday before the reverse singles on Sunday.

"I thought the first five or six games were tough," said Murray, the 2012 US Open champion.

"I wanted to make the points long and challenging for him, physically. Maybe I was trying to play with too much spin.

"Once I got the break, I won a few games in a row. I lost my concentration a bit at start of the third but saw it through. It was OK - it could be better."

Murray, who withdrew from the French Open this year with a back injury, appeared to be suffering a similar problem in the third set.

"My back is a little bit sore. The change of surface is difficult, but after a couple more matches I'll have some time to rest, so let's just get the win this weekend."

Smith said he would leave the final decision to Murray, and expressed his confidence in Marray, who won the 2012 Wimbledon doubles title with Fredrik Nielsen of Denmark.

"Andy has been feeling his back - it's an ongoing issue," he told BBC Sport. "He has good people around him and will get lots of treatment.

"Then it's really up to Andy. The welfare of Andy's body is far more important than this tie and we have a former Wimbledon champion who is waiting to come in should Andy not be able to play. It's not a bad situation to be in."

But the Wimbledon champion broke Coric in the eighth game and went on to win the next seven games, taking the second set 6-0.

The Croat broke the Scot in the third, but Murray fought back to seal victory.

Evans, who broke into the world's top 150 for the first time after reaching the US Open third round, was outclassed by an opponent who adapted far better to the demands of clay.

Dodig, who served 10 aces to his opponent's two, broke in the seventh game to take the first set and cruised through the second with a double break.

Trailing 5-2 in the third, Evans saved two match points on his own serve to force Dodig to hold, which he did with some ease to level the tie.

"I didn't play badly but he didn't give me anything," said Evans. "It was no secret it was going to be hard and I'm glad to have three sets on that court. That will definitely help me on Sunday."

The winner of the tie will qualify for the elite World Group. The last time Britain took part at that level was 2008.