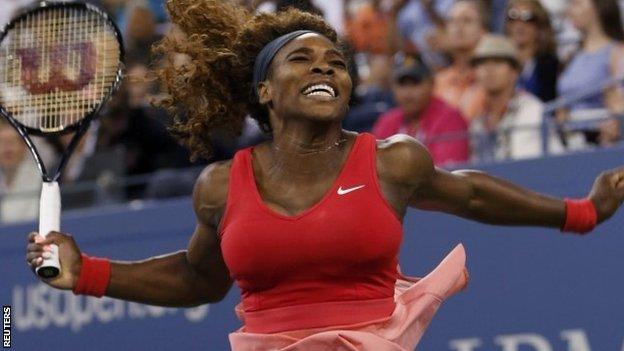 World number one Serena Williams won her fifth US Open title in a thrilling final against Victoria Azarenka at Flushing Meadows.

The American, 31, overcame a determined opponent and a testing wind to win 7-5 6-7 (6-8) 6-1 and repeat last year's final victory against the Belarusian.

Williams has now won 17 Grand Slam singles titles, moving her to within one of Martina Navratilova and Chris Evert, and seven short of Margaret Court's record total of 24.

But after letting a double-break lead slip in the second set, and twice failing to serve out the match, Williams was made to dig as deep as in any of her 16 previous major wins.

"Vika's such a great opponent, such a great fighter and that's why she's been able to win multiple Grand Slams," Williams said of Azarenka after their contest.

"That's why it was never over until match point.''

Azarenka, 24, had beaten Williams twice this year, and clearly believed she could defeat the American on a bigger stage.

Williams looked in ominously good form when she cracked a backhand cross-court to break in the opening game, but a couple of errors gave the advantage straight back.

Azarenka was dealing better with the gusting wind on Arthur Ashe Stadium and serving well, in marked contrast to Williams, who also had to cope with a skirt that was clearly not designed for such conditions.

Serving to stay in the set at 4-5, a nervous Williams came up with a double fault and a foot fault, but fought her way out of trouble with two tremendous backhands and an ace.

The pressure suddenly switched to Azarenka and, now swinging freely, Williams hammered a cross-court forehand and a return at the second seed's feet to clinch the set in 58 minutes

Williams was on a roll and broke twice in the second set on her way to a 4-1 lead, but Azarenka regrouped and got one of the breaks back as the American endured more skirt issues and sent a forehand wide.

The champion still had the comfort of that second break - but faltered twice with victory in her sights.

A double fault and a wayward backhand saw the chance disappear at 5-4, and Williams missed with two backhands at 6-5 and then, to gasps from the 23,000 spectators, double faulted for a seventh time.

When Williams missed another backhand to offer up two set points in the tie-break, she swiped her racquet in anger, appearing close to tears, and despite seeing off the immediate danger, the pressure told and she sent a backhand long when facing a third set point.

Williams could see another Grand Slam title slipping away but she responded superbly to dominate the final set.

Azarenka had served for the title last year, so knew all about going into a decider against Williams, but at 2-1 down she double faulted on break point. When the American broke for the seventh time, the contest appeared all but over.

There was one more flutter of nerves for Williams when she netted on her first match point, but Azarenka put a backhand over the baseline moments later to send the American leaping deliriously in celebration after two hours and 45 minutes of tension.

"It is a tough loss, but to be in the final and play against the best player, who deserves to win today, it's incredible,'' said Azarenka.

"I gave it all today. We showed our hearts. We fought hard.''