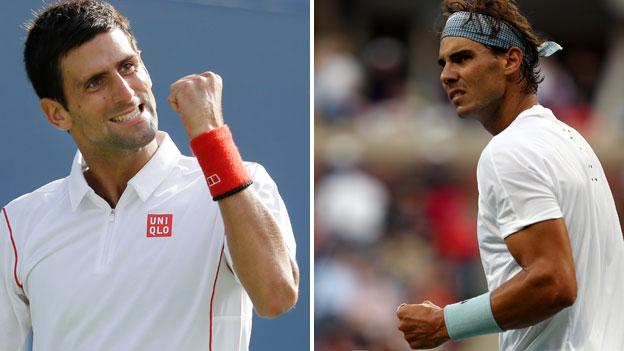 Rafael Nadal is the best player in the world heading into the US Open final, says world number one Novak Djokovic.

The top two seeds will meet for the 37th time, and sixth in a Grand Slam final, at Flushing Meadows on Monday.

And after one win apiece in their previous US Open finals, Nadal's form this year has made him many people's favourite to win a 13th major title.

"With no doubt he's the best player in the moment this year," said Djokovic, a six-time Grand Slam champion.

"It's always the biggest challenge that you can have in our sport now. I mean, he's the ultimate competitor out there.

"He's fighting for every ball and he's playing probably the best tennis that he has ever played on hard courts."

Nadal, 27, has won all 21 matches on hard courts this year since returning from a seven-month lay-off because of a knee injury, and dropped serve just once while powering through the draw in New York.

He also leads the head-to-head 21-15 and has won five of his last six matches against Djokovic, including a dramatic semi-final victory at the French Open, after the Serb had won seven times in a row in 2011 and 2012.

"Novak is a great opponent. There are other ones, but it's true we have already played a lot of important matches for our career, so that makes that confrontation special.

"And when you have the chance to win against the most difficult players, it's true that the victory is more special.

The final has been scheduled for a Monday this year, having been postponed until Monday for the last five years because of rain.

It has given the men's finalists the guarantee of a day off between the semi-finals and final, but leaves the controversial three-day opening round in place.

"I'm not in support of a Monday final, but this is what it is," said Djokovic, who is appearing in his fifth final in New York, and fourth in a row.

"I mean, it's just an ongoing subject with the US Open and with people who are in organisation here. I don't see why the US Open should get an exception in that."

Nadal was in agreement, saying: "I like to finish the tournament on Sunday, not on Monday."

US Open: the stats

"The past might have centred around intuitively understanding that a player who gets a majority of their first serves in will win the match. The future is pinpointing the exact percentile threshold the player must cross to win."

How technology can predict the US Open winner

Djokovic said he was "physically fine" after his five-set semi-final win over Stanislas Wawrinka, and knows what to expect on Monday.

"The way he's been playing he's very confident, but I know how to play him," said Djokovic.

"Hard court is the surface that is my most successful. I have played him already here twice in the finals. I know what I need to do.

"Now it's of course easier to sit here and say, 'I know what I need to do,' but I've got to do it on the court. I'll be ready to give everything I have for the trophy."