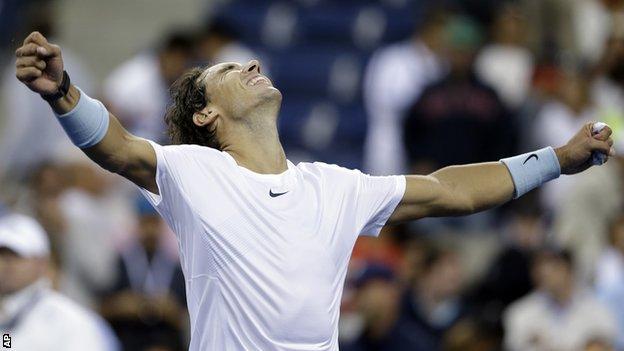 Second seed Rafael Nadal powered past France's Richard Gasquet to set up a US Open final against world number one Novak Djokovic.

Nadal, the 2010 champion, extended his unbeaten run on hard courts this year to 21 matches - despite dropping serve for the first time in the tournament.

"Last year I didn't have the chance to play on this court," said Nadal, who was sidelined for seven months by a knee injury that some speculated might prevent him from returning to the very top of the game.

"To have the chance to play in the final on Monday is just a dream for me. It has been two amazing weeks.

"Novak is a great champion and will be a tough final for me, but I hope to be ready for that."

The manner of Nadal's victory was in marked contrast to the previous contest on Arthur Ashe Stadium, which saw top seed Djokovic beat Stanislas Wawrinka over four hours and five dramatic sets.

Gasquet, 27, was up against a man who had won all 67 service games in the first five rounds, and the Frenchman made the worst possible start by dropping his own serve in a loose opening game.

He managed to fashion a break point - only the seventh against Nadal during the tournament - but the Spaniard cracked a forehand winner past him and rolled through the set in 43 minutes.

Gasquet had found some testing angles and a couple of flashing winners off his superb backhand, but with a 10-0 record in previous meetings it looked ominous when he was broken again at the start of the second.

It therefore came as a surprise when the Frenchman became the man to finally break Nadal after setting up the chance with two backhands, and with his own serve now functioning well it took an ace and a fine body serve for Nadal to prevent the double break.

The Spaniard had lost his previous tie-break against Philipp Kohlschreiber in the fourth round, but after Gasquet opened with a double-fault he raced into a 5-1 lead at the changeover.

Gasquet offered up another double-fault to fall two sets behind, and with that his challenge was all but over.

Nadal saved a break point at the start of the third with a beautiful drop shot and then arrowed a forehand down the line to create a chance for himself, which the Frenchman handed over as he framed a backhand skywards.

There was no stopping Nadal with the finish line in sight and there was a sense of inevitability about the ending as Gasquet buckled under the pressure, double faulting for the fourth time on match point.

"I don't know if it's a victory to win his serve," said Gasquet as he reflected on defeat. "I'm not sure about it. I think it's better to win one set or more

"In a Grand Slam it's even tougher to play against him because it's three sets to win.

"I did not play a bad match, but it was three sets to zero, so at the end he was the best on the court."

It was the second Grand Slam title in as many days for Hlavackova, who joined Max Mirnyi of Belarus in winning the mixed doubles on Friday.

"It has been amazing," said Hlavackova. "I cannot believe I won two Grand Slams in two weeks. I want to thank Lucie. She helped me as much as Max did."