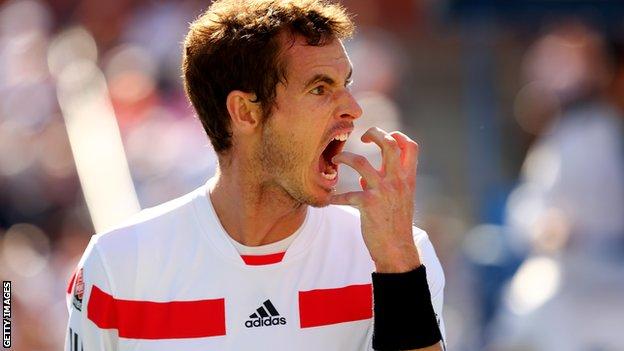 The Briton, seeded third, failed to earn a single break point in a 6-4 6-3 6-2 defeat on Arthur Ashe Stadium.

Murray has struggled to find his best form since winning Wimbledon two months ago and his frustration was clear when he was given a code violation for racquet abuse.

"It was a tough day for me," Murray told BBC Radio 5 live.

"He played exceptional tennis and served very, very well. He hit a lot of lines on big points, went for his shots and they all went in today. He played too well."

In a match many had predicted would go to five sets, it took only two hours and 15 minutes for Wawrinka's brilliant attacking game to prevail on a hot and blustery afternoon in New York.

The 28-year-old moves on to his first Grand Slam semi-final, where he will face world number one Novak Djokovic who beat 21st seed Mikhail Youzhny 6-3 6-2 3-6 6-0 in the night session.

Murray, 26, won his first major title at last year's US Open, but even the return of Sir Sean Connery to watch his fellow Scot could not inspire a similar level of performance.

Wawrinka was the last man to beat Murray in the first week of a Grand Slam, at the 2010 US Open, and he inflicted another painful defeat on the British number one.

The conditions caused both players problems in the early stages, with Murray netting a straightforward volley before Wawrinka played an air shot on his usually brilliant backhand.

It was the Swiss who looked the more threatening though, with Murray failing to find any potency on serve and barely winning more than half of the points in his service games.

The making of Stan the Man

Wawrinka employed Swedish coach Magnus Norman in April and the former world number two set about trying to give the Swiss a killer instinct on court.

"It's not easy but I knew that he has it," Norman told BBC Radio 5 live.

"He's shown in the past, on and off, that he has it. It's a little bit a matter of self-belief and having a good team around him that he believes can take him to the next level.

"Then of course it's a lot of hard work. Day in and day out you have to speak about these things, because it still doesn't come naturally to Stan. He still doesn't really believe in himself 100% all the time.

"We are playing in an era with guys who are probably some of the best that ever played tennis, so it's a big challenge but it also makes it very interesting. They are tough but they are not unbeatable."

He was made to pay in game 10 when he let a 40-0 lead slip with three errors, and after a 16-minute tussle Wawrinka converted his sixth set point thanks to a loose Murray forehand.

That prompted the champion to smash his racquet in anger and he was quickly in trouble in the second set, but came up with a second-serve ace down the middle to stay on terms.

Wawrinka spoke before the match of how he had become a more confident player in recent months and the belief flowed through him as he took a grip on the match with successive love games.

A rasping backhand winner got him the break and a 4-2 lead - but it came after Murray had offered up three errors, and the Briton looked a dejected figure heading into the third set.

Murray's record from two sets down is impressive but there was no sign of a comeback this time, and a double fault gave Wawrinka the lead at 2-1 before another terrific pass all but sealed victory for the Swiss with a double break.

Wawrinka held his nerve from 0-30 to serve out one of the biggest wins of his career, and ensure Murray would not be defending his title in the final on Monday evening.

"I was playing well enough to get to the quarters," added Murray.

"It's not an easy thing to do - there's only eight guys in the tournament who have been able to do that.

Wawrinka said: "It's amazing for me to be in the first semi-final in a Grand Slam, especially after beating Andy Murray, defending champion. He just won Wimbledon, too. He's a great champion."