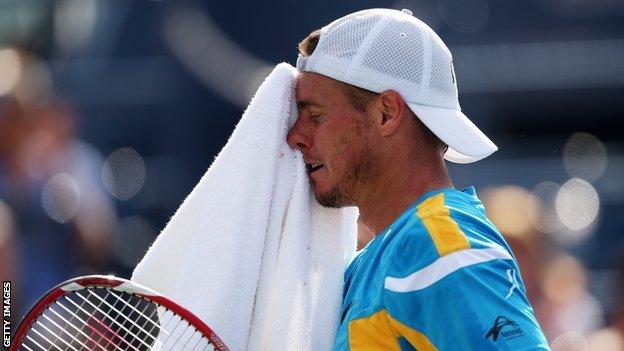 Lleyton Hewitt let a golden chance to reach a first Grand Slam quarter-final in four years pass him by as he lost to Mikhail Youzhny in five sets.

Azarenka struggled to find anything like her best form in a match postponed from Monday because of rain, dropping the first set before failing to serve out the match after fighting back. The Belarusian needed four match points but eventually sealed the win in two hours and 10 minutes.

"Ana just came out firing and played really amazing tennis in that first set," said Azarenka, who plays Daniela Hantuchova next. "I felt a little bit out of place, I was like sleeping. I had to wake up in that second set and felt more determined and focused. The match points were pretty bad and I had to stay tough."

The world number one said he "played flawless tennis" as he crushed Spain's world number 43 in 79 minutes. Djokovic won all 24 points on serve in the opening set and ended the match having won 86 points to 36 for Granollers. "This is great encouragement in front of the next challenge," said the Serb, who will face Youzhny in the quarter-finals.

A brutal display from Williams ensured she required only 52 minutes to book her place in the semi-finals, where she will face Li Na. The number one seed completely outclassed Suarez Navarro, who became the first female Grand Slam quarter-finalist since Manuela Maleeva in 1989 (against Martina Navratilova) to fail to win a single game.

"She's a great player," said Williams of her Spanish opponent. "The conditions are so tough and it was not her best tennis today. I've been playing here for like 50 years so I've kind of got used to the conditions."

Hewitt, ranked 66th, looked destined to reach his first US Open quarter-final since 2006 with a characteristically gutsy showing on Louis Armstrong Stadium, but the former world number one could not finish the job.

From 4-1 ahead in the fourth set, Hewitt saw an alarming run of seven games in a row go against him, and the Australian failed to serve out the match at 5-4 in the fifth as Youzhny took the last five games.

"It's obviously disappointing to lose, but I left it all out there," said Hewitt. "There's not a whole heap more I could have done."

Wawrinka continued his impressive 2013 form by beating outside title contender Berdych in four sets to set up a quarter-final meeting with Andy Murray - the last man to inflict an early Grand Slam defeat on the British number one when he beat him in round three at the 2010 US Open.

The Swiss prevailed in a high-quality match featuring 68 winners, closing out the match by breaking Berdych's serve for the sixth time.

He said: "It's always tough to play against Tomas. He always puts you under pressure. I'm just really, really happy. Tonight is a night I will never forget."

Jamie Murray and John Peers nearly took it all the way against second seeds Bruno Soares and Alexander Peya, saving three break points and then two match points in the third set, but the Brazilian-Austrian team's returning got the job done. Dom Inglot is the last Briton standing in the men's doubles, alongside partner Treat Huey of the Philippines.

"We won two really close matches, beat three pretty good teams," said Murray. "It was a good tournament for us, absolutely. If you'd said to me before the tournament 'you're going to get to the quarter-finals', I'd have taken that. I go home looking forward to the rest of the year."

Victoria Azarenka is asked why boyfriend RedFoo is in Australia and not New York. "Because he's a judge on the X Factor," she explains. "I don't know why he's there. I'm not so happy about it either. I'm joking. Yeah, he's there. Today is his birthday in the States, but it was his birthday yesterday in Australia."

Jamie Murray is in agreement with those who think the night sessions have been a little less than thrilling so far. "A lot of times doubles is more exciting than singles," he says. "A lot of times these matches on the show courts are dull. How many close matches have you had this tournament on Arthur Ashe Court? Almost nothing. I don't get excited about turning on the TV and watching Djokovic win 6-0 6-1 6-0, and that's your prime-time match."

Marcel Granollers knows where things went wrong as he won only three games in his fourth-round match against Novak Djokovic. "It was not easy to play today," he said. "It was windy, and I didn't feel very good on my return."

Li Na explains why she replaced her husband as coach. "He's a very nice guy, but for me it's tough to find balance between husband and coach. When he was helping, he was training so hard on the court. I would say: 'You're my husband. Why are you training so hard?' So it's a problem for me."