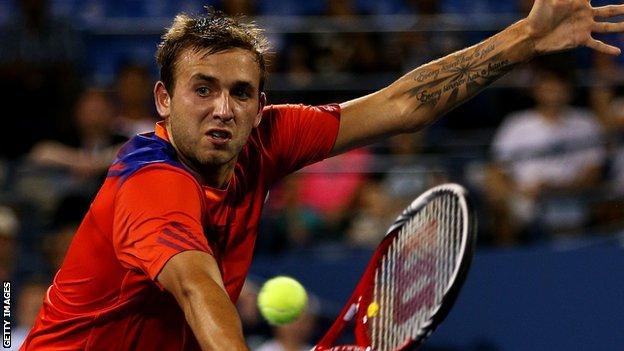 Former British number one Elena Baltacha has said Dan Evans may have "turned a corner" in his career with his US Open success.

Evans, 23, reached the third round of a Grand Slam for the first time.

"I'm so happy for him, with everything that's gone on with him," Baltacha told BBC Radio Suffolk.

"I really hope he's turned a corner. I think he has. He's such a talented young boy. He's got everything there."

"What had been conspicuously lacking was the commitment to live his life like a professional tennis player. The work he has put in with the LTA's fitness trainer Steve Kotze, and his willingness to commit to what has turned out to be a six-week tour of North America, suggest he also now has the required resolve."

The Lawn Tennis Association cut Evans's funding in 2012 because it said he had shown a bad attitude and lacked commitment.

But the Birmingham-born player won the deciding rubber as Britain clinched a 3-2 victory in the Davis Cup match with Russia in April.

And, coming in ranked 179th, he became the first British player for seven years to come through three qualifying rounds at the US Open, going on to the third round where

"If he can keep himself on the right line I think there's many, many more things we'll see from him," said Baltacha.

"I'm so glad he's really into it now and getting all the right support around him and that he's taking it seriously. He'll only get better, so it's very exciting."

Baltacha is attempting to improve her own ranking after returning to the circuit in April following ankle surgery.

The Ipswich-based Scot despite serving for the match against the Portuguese.

Her spell on the sidelines, which stretches back to last summer's London Olympics, saw her drop from 135 to 243 in the world.

"I had that bit before the surgery when I wondered if it was worth going through or if I would have the stomach for it," said the 30-year-old.

"But I had the surgery done and I started training and before I knew it I was back on court again. I got that hunger back.

"I'm carrying a couple of injuries at the moment but hopefully I'll get past them and be back on court soon.

"The Australian Open will probably be qualifying again. But I'm hoping, because I won't have any points to defend until April, everything can go towards my ranking and come the French Open I'll be main draw again."