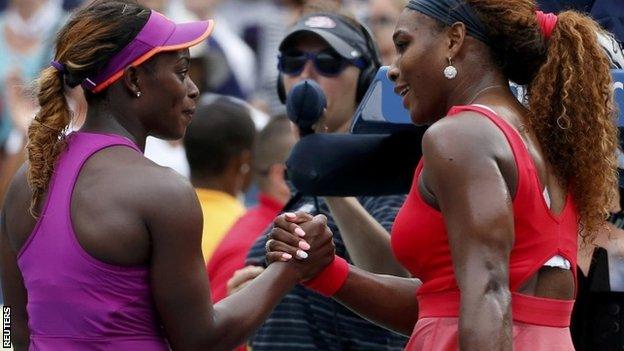 World number one Serena Williams won her much-anticipated all-American clash with Sloane Stephens to reach the quarter-finals of the US Open.

The four-time and defending champion came through 6-4 6-1 on Arthur Ashe Stadium and goes on to face Spanish 18th seed Carla Suarez Navarro.

"The quality was great," said Williams. "Sloane's a great player.

"It was a fourth round match, but it definitely had feelings more of a quarter-final or a semi-final match."

Stephens, 11 years younger than Williams at 20, said: "She's number one in the world for a reason. She played really well.

"It didn't go how I wanted. The second set got away from me a little bit. All in all I thought I competed well and played well. That's all you can do really."

The American number two won their previous match at the Australian Open in January before a brief falling-out after she claimed Williams had snubbed her.

An apology quickly followed from Stephens and the pair had been at pains to point out how well they now get on in the build-up to Sunday's rematch, but it lent an extra edge to the encounter.

Williams was certainly fired up from the outset as she piled huge pressure on the early Stephens service games, crunching a return to make the breakthrough at the third attempt.

Despite a superb year that has included a record winning streak and a second French Open title, there have been occasional signs of nerves - and they returned once again.

Williams handed back the advantage with her third double fault of the match in game seven and failed to convert another break point as she was pegged back to 4-4.

The 16-time Grand Slam champion was under pressure and she came out fighting, holding serve confidently and then launching into another Stephens service game.

Wayne Bryan, father and coach of the Bryan brothers, on BBC Radio 5 live sports extra: "Serena was just too good, offensively and retrieving the ball. However, Sloane received great applause from the crowd and had three big wins, so she's had a good tournament."

Two set points came and went before the 15th seed cracked, sending a forehand flying out to give up the set with her 21st unforced error of the afternoon.

Williams escaped an early break point against her in the second set with a forehand, and a Stephens double fault at 2-1 opened the door to allow the top seed a decisive lead.

A fourth break of serve followed as Williams powered towards the quarter-finals, sealing her place after one hour and 27 minutes.

"It's definitely difficult playing people that you like, that you always want to see do well," said Williams.

"But you have to go out there and kind of put that to the side and realise, I want to do well myself and take every point as it comes."

Asked about her position as the heir apparent to Williams, Stephens said: "I embrace it. I think it's tough because there's a lot of us.

"I think it's just because I'm top 20 now. I mean, next year there could be three other American girls in the top 20; it just depends. Right now, I'm carrying the little torch."